Cooler glasses than yours 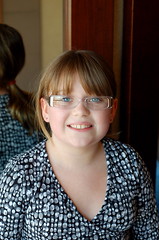 I'm not the only one in the family who got new glasses this week.

In fact, I think my older daughter's new set may be the funkiest spectacles anyone in our family has ever owned. They're clear and colourless, except for groovy brushed-metal strips on the sides and a "Vogue" brand logo. She loves 'em, and her sister, who doesn't yet need glasses, is a bit jealous.

And she apparently did very well in her Royal Conservatory of Music grade 1 voice exam today (where I took the photo). She didn't seem at all nervous, but still refuses to let the rest of us listen to her practice singing at home, so she does that in the basement.

Cool glasses, indeed ! But I must admit that, after 14 years of buying glasses for one, then two kids, I was relieved last year when the ophtalmologist told us they didn't need them any more...

I am more surprise to hear that she already sings at the Conservatory : here, you cannot start listen until you get your "adult voice" (I don't know how to translate the technical word), which is rarely before 13 for girls. My sister, who is a good soprano (almost choose it as a career, gives concert), started when she was 15 or 16.

Well anyway, your daughter looks wonderful, and very much like her mother.

To Laurence: It used to be that way over here (Belgium) as well. You weren't allowed to start singing before you were considered grown up, i.e. 15 or 16. Nowadays the kids can start singing like they would start with any other instrument. If I look at the academy (conservatory) I attend I do notice a lot of adults, and only a few kids. Most of the kids prefer learning to play an instrument first (or their parents prefer it).

Derek: Very cool glasses. Your family makes me want to buy some new ones.

Ah singing. I used to sing in the bathroom as long as the tap was running. After that I felt too shy. Thing was actualy that everyone could hear me sing anyway, just as they could when I sang on the toilet. It's all about not being able to see you I guess. Nowadays I don't mind everyone hearing when I practice. The neighbours actualy seem to enjoy it.

When I was your daughter's age I did not ace my singing exams. Mainly because they consisted of reading notes. I'm still terrible with it.

I know I should be PC and focus on her personality and all, but your daughter really has beautiful blue eyes. The glasses look great.

those are crazy cool glasses!!Very nice. it's not often that a sibling is jealous of a sisters glasses.

Those blue eyes have been killer since she was an infant, just like her mom's.