Don't use UPS to ship to Canada 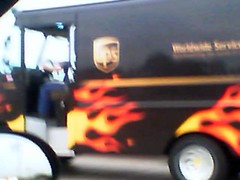 Wrote this to an online retailer in the U.S. a few minutes ago:

Hi, I just wanted to let you know that I was just about to buy one of your products, but backed out when I discovered your only shipping method is UPS. I'm in Canada, and UPS is notorious here for egregious and mysterious "brokerage" fees when clearing customs, and also for slow or mishandled deliveries. See here:

These experiences are not unusual—I have refused, if given any choice, to use UPS as a carrier for the past ten years because of repeated problems and extraordinary fees.

Shipments sent via FedEx (express or ground), regular parcel post, and other services do not generally encounter these issues. If you can provide any alternative shipping method other than UPS, we'd be happy to make a purchase. I'm sure there are many other Canadians who feel the same.

This follows UPS's latest snafu here at our house, attempting to charge us almost $90 in brokerage and other fees for a shipment of cosmetic samples sent to my wife that she didn't purchase and was not going to sell. Under instructions from the manufacturer who shipped it, we refused the delivery and will have it re-sent with another carrier.

Avoid UPS for anything shipped into Canada. Better you know this now than learn it the hard way as I have.

thanks dude. this happened to me too but i never looked it up.

btw, i love how the category of this post is "linkbait." :)

My mom and dad are veteran Canada Post employees. They have long warned me about UPS. Apparently, your best bet is to ship via USPS, as they have the lowest brokerage fees. If the item is under $20 and the declaration says so, you don't pay fees. If it's under $60 and a gift, you also avoid duty and such. So always ship gifts to your wife and vice versa. In fact, only order gifts.

You also avoid duty if the item is made in USA, although that's a tough one nowadays.

Yep. I have a box in Point Roberts, and shipping there via UPS is a dream, but it's in the USA (of course). Certainly not my first choice for having them cross the border. I like the USPS for regular stuff. It always shows up, it's not too expensive and there aren't too many surprises.

I have been hosed a couple of times on UPS brokerage charges. I'm amazed that they still do this sort of thing...

I meant to note that the part about gifts applies, no matter what shipper you use.

Add me to the list of those who've been nailed by UPS.

Thanks for the tip Derek. I don't do a lot of international shipping, so I was unaware of the problems with UPS.

I've lived on both sides of the border, so I've long known this one. UPS is a favorite of Americans because it was around long before courier companies like Fedex. It started as a competitor to US Post, and would deliver a package cheaper than them. There was no such thing as overnight back then, it would be ground and take just as long as UP Post, but would save money.

It was actually a relative that was quite high up in UPS that was sent to open the first office outside of the US for them... in Vancouver. He offered my dad a job as a driver, my dad should have probably taken him up on that because imagine where the first employees are now. That relative then traveled to many other countries setting them up for the first time.

Over many years of working jobs that involve shipping and receiving, and also getting things shipped to me, I've discovered the following:

If you are shipping US to US, UPS is the best way. That is why so many American companies just offer that option.

If you are shipping US to Canada, the recipient will always get hosed with this ridiculous fee that is way above everyone else's unless they do this regularly and have their own broker on file with UPS.

If you are shipping Canada to Canada, UPS is one of the most expensive operations.

Based on this, I think the only way UPS Canada is still in business is because of US companies and residents instinctively using it. If that stopped, UPS Canada would be forced to start being competitive.

Don't know much about Canada, but I can tell you one thing : I had the most complicated problems with UPS France.

I ordered a computer and a printer, the computer came with a QWERTY keyboard (totally impossible to use for a French person who can type, we have AZERTY keyboards) and the printer was broken. So I had to change both. Apple told me UPS would take both and deliver both in exchange... it turned out they came 6 times !

And I always had to call some expensive number, give 14-digit numbers, wait in line, get a new appointment, and they would come some other time or day...

UPS is toxic to your wallet.

Ha! I hate UPS with a passion. My worst screw you in the ass brokerage fee from them was $43. On a jacket I bought on sale for $40. That's right, brokerage was more than the cost of the item. UPS can burn in hell.

I've had a couple of similar experiences with UPS. Used goods from the US totaling less than $20 in value had "brokerage" charges of nearly double the value of the goods received.

I learned my lesson long ago and if the dealer doesn't ship via postal service (preferably international EMS) I won't buy from them.

In my opinion UPS is running a con game with their "brokerage services". At least one shipment I received was of goods that had no applicable tariffs or was under the limit for such tariffs. Caveat emptor, mostly with the shipper. EMS or certified mail is a better bet.

I've found FedEx and parcel post to be equally fine for international shipments -- when there are duties or taxes due, neither overcharges, and they're generally good about handling any disputed fees too.

I wish I had seen this yesterday.
I just shipped to packages to canada - Both were purchases of stuff I sold on Ebay. I normally use US postal Service, but was off from work and decided to use UPS.
Customs forms was a real pain. UPS thereatened to return the products to me if I did not give a receiver telephone number (I had to come home and contact the buyer and get their telly number).
Cost was atrocious and then I found out that the buyers in Canada would also have to pay a $5 fee as well as 15% of the value of the goods. The purchases were both nominal - less than $100 each, but the cost to ship them and the hassle really made this a non-profitabel deal for me and probably for them, when shipping to Canada plus Fees and Taxes is greater than the cost of the goods.
I NEVER have had problems like this shipping to Canada, UK and Germany with our US postal service or Fedex!!!!

Need help!! I visited the US for 8 days and left my digital camera at my friend's place. This was bought in Canada but I have no proof. Glad I saw where they shouldn't ship UPS... One can see this is not new... as the screen has a crack in it. Will I have any problems? Will I have them ship to me USPS>

Use regular U.S. postal mail and have your friends declare the item as a gift worth less than $20 on the customs form. (If they include a note saying something like, "Here's your camera back! that might help, even better.) It should be fine, especially if the camera isn't in any packaging and is used.

hey, does this mean it won't be worth it to win an eBay bidding on a DSLR camera and a lens and have it shipped from the US to Canada?

Just have it shipped by someone other than UPS, and you're good.