Photos of the "Edison and Leo" stop-motion movie set 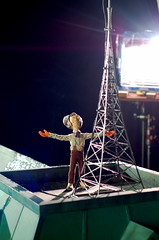 For a good chunk of the past year, several dozen animators have been working in a former native residential school near Mission, B.C., rented out to them by the current owners the Sto:lo Nation, on what looks to be a fascinating movie, Edison and Leo, which should come out later this year.

It's the first feature-length stop-motion film made in Canada, which is suprising considering this country's long history of innovative animation projects. I visited the set last week with my friend Jeff, who is working on publicity for the project.

Edison and Leo has a dark, retro, steam-punk look (it's set in the 19th century), and when production was at its peak late in 2007, there were as many as 14 sets in use simultaneously. Now that the main shooting process is winding down, there are only a few sets left, but it's still a strange experience if you've ever visited a movie set before.

Unlike computer or traditional animation, stop-motion has actual sets, with all the wiring, lighting, and construction that entails. However, the sets are at a strange scale, built for characters a few inches high. And while live-action sets require absolute silence and very careful tiptoeing around, with Edison and Leo Jeff and I were able to wander about, say hi to people as they worked, take photos, and generally feel at ease—because each animator produces, on average, less than 10 seconds of footage a day, one frame at a time. Take a look:

There were some neat details. "Filming" actually takes place with modern Canon digital still cameras, hooked up (oddly) to old manual-focus Nikon lenses. They're connected into computers next to each set, which the animators can use to check their work, and then through a jury-rigged fibre-optic cable network run through the old school to a set of storage servers, and also to a room where the movie can be edited on the fly.

The production facility is almost completely self-contained: all the sets, costumes, and characters are built on site, which gives the team a lot of flexibility and also keeps costs down. (Most of the staff are from other parts of Canada, and have been living in trailers on the property.) Other than the sets themselves, the building still looks like a school, which is pretty creepy considering its history.

If you'd like to read up on the project, check The Province, the Victoria Times-Colonist, the Deadwood blog, the MTV Movies blog, Playback, Telefilm Canada, and IMDB.

HEY, GREAT SET OF PICTURES...BUT TO CORRECT A BIT OF YOUR FACTS....A LARGE BULK IF NOT THE LARGE MAJORITY OF THE COSTUMES WERE MADE AT OUR COSTUME STUDIO "ENIGMA ARCANA DESIGNS INC." LOCATED IN VANCOUVER.WE WORKED ON THEM OVER A PERIOD OF AROUND 5 MONTHS BASED ON THE DESIGNS GIVEN TO US BY SIOHBAN GRAY. IT REALLY LOOKS LIKE A WONDERFUL FILM ; MY WIFE AND I ARE GOING TO SEE IT TOMORROW AT THE VIFF.

Thanks, BigDada, I had no idea! Now we know.

By the way, it's probably a good idea to turn your CAPS LOCK KEY OFF. Capital letters get interpreted as SHOUTING on the web and in email.

Here's some info on the design shop.

WHO KNOWS? maybe BigDada just needed to SHOUT this? everyone should SHOUT LOUD once and a while. believe me, that's UBERSAFE :)

i'm waiting to watch the movie though, but i fear that the distribution for europe is more than terrific...