Less who we were 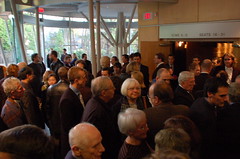 The profound shame about yesterday's memorial event for my late friend Martin Sikes is that many of us who spoke and sang and laughed and cried there didn't take the chance to tell him why he was important to us while he was still alive.

I was glad that I both spoke and played drums at the event—being busy helped distract me a bit so I didn't cry the whole time. I certainly had to clutch my wife's hand for support. 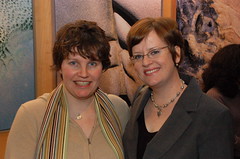 Martin was, by any measure, an extraordinary man. Otherwise there wouldn't have been 400 people—from relatives to co-workers to high school and university chums to those who only knew him from the parties he organized—out to remember him on a sleety January Sunday afternoon. More than one person told me they were quite surprised at how many different directions, into what they thought were completely unrelated groups of their acquaintances, they discovered his influence had reached. 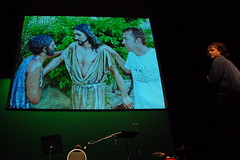 To find out why, you can take a look at the memorial page I set up for him, which also includes notes from several of the eulogies spoken in West Vancouver yesterday. I learned a lot about Martin from those talks, especially about his life as a kid before I knew him, and his career and pastimes over the past decade or so, when I saw him only sporadically.

I expect some of his more recent friends and acquaintances might have learned stuff too. For example, his first commercial software success, the Blue Board software he sold as a teenager from his parents' house. Or that he, as a comfortably out gay man, had a girlfriend 20 years ago. (Any of them who'd ever met his adult daughter might have deduced that, of course.) My friend Sebastien summed Martin up best by saying that he was always trying not just to have fun, but to invent fun. 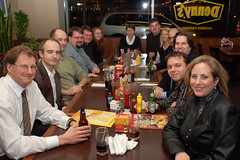 After the memorial, a bunch of Martin's old modemer Excursionist friends, including his daughter and her mom, gathered at Denny's on Burrard Street in downtown Vancouver, one of our frequent hangouts in the mid- and late 1980s. I think Martin's death hit us all harder than we might have expected. (I'm still bursting into tears at unpredictable moments today.) Like Dave wrote, we miss him more than we realized, for a panoply of reasons.

And we spoke of getting together more frequently too—some of us had not seen each other in 15 years or more. We figured out that the things we miss about Martin are also things we miss about each other. Teenage and early adult years are formative for anyone. But those of us who were part of Vancouver's early BBS community have an additional kinship of having been geeks before it was cool, and of having lived and loved and made friends (not to mention mistakes) online 10 or 20 years before the whole rest of the world started doing it.

I've said before that I have the technology and privacy instincts of a modern 17-year-old (search for me online, and you can find out almost anything you need to know, and probably more than you want). That's because when my friends and I were 17, we were already keeping in touch by flinging bits. However, perhaps uniquely, while we remember a time before email and the Internet, they were still critical components of how we grew up. 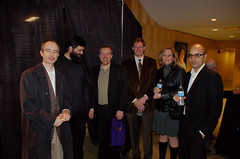 Many of us have remained in technical fields, yet have drifted in different directions. Still, when we do meet, the connection is immediate, and not merely nostalgic. At dinner, we still finished one another's sentences, even on topics (Facebook, climate change, the habits of our children) that didn't exist in our university days. After our greasy meal, I drove Larry, Bob, and Richard home across the eastern suburbs of Vancouver, and had tea at Richard's place before heading home myself. We spoke a bit about old times, but also nerded out about wireless data, servers, rebuilding houses, and fish tanks.

Who we were is also who we are. Martin was part of that, but he isn't anymore, which is one reason why losing him made us so sad. Despite his many successes, and much more than the rest of us, he had chosen to stay (or perhaps couldn't avoid remaining) the tinkering, pranking, inventing, train-obsessed, silly, party-throwing, risk-taking person he was when we were growing up together. Who we are can't be as much who we were without him.

I've said before that I have the technology and privacy instincts of a modern 17-year-old.

But without the angst and random emotional drama, which is probably why I like reading your blog so much.

I left the memorial too early, I think; I missed the meeting at Denny's, and still feel the lack of closure. I hope to see all of you again, and far more often than once in fifteen years.