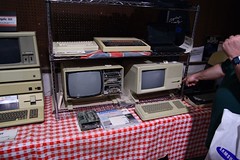 Wired has a nice list of Apple's most notorious flops, including the Newton, the Macintosh TV, and the Lisa.

It's a short, decent list, but I'd argue that the Apple IIc was actually reasonably successful; why they didn't list the disastrous Apple III (or the thermal-paper SilenType printer that went with it) in its place, I don't know. Maybe the Apple III was so bad that Wired blocked it from memory.

Hey! I really really liked the several Apple Newtons I owned and used. They were great little machines, whatever aspersions others may cast on them!

I don't think the Newtons were bad, but like Wired, I think they were ahead of their time. But now we have the iPhone, right?