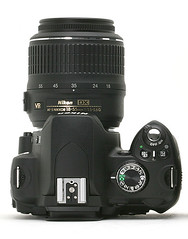 I was right that Nikon would introduce a new digital SLR soon, but totally wrong about where it would fit in their lineup. The new D60 is an introductory-level camera that doesn't seem to incorporate many of the revolutionary new technologies from Nikon's high end D300 and D3.

No-nonsense photographer Ken Rockwell thinks it's a higher-end machine than I do, with image processing that may give the D80 a run for its money. But to me, the D60 looks like it will replace the D40 and D40x—it uses the same body design, but adds some interesting new features such as a stop-motion movie mode, next-generation sensor dust removal, and a digital rangefinder for focusing lenses manually.

That last item is useful, because like the D40 and D40x, the D60 lacks an autofocus motor in the camera body, so only newer Nikon-mount lenses with the focus motor in the lens (called AF-S and AF-I by Nikon) will focus automatically. Many nice lenses, even ones Nikon still manufactures, such as the AF Nikkor 50mm f/1.8 I use—as well as numerous older lenses, both primes and zooms—can therefore only be focused manually with the D60.

Still, it is a nice camera, and a strong direct competitor to Canon's new Digital Rebel XSi announced a few days ago. Nikon's aging D80, like Canon's EOS 5D, remains in the lineup, and unless both manufacturers have further surprises up their sleeves, that's the way it looks to be for the next little while. Despite the D60's niceties, my D50 (released back in 2005) remains a better camera for my needs, primarily because it still has that autofocus motor for the three of my four lenses that lack their own.