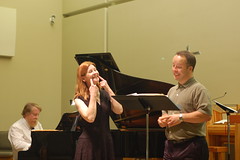 Sunday night, my wife Air and I took a quick trip back to Victoria for one reason: my old friend Simon, who lives and works there, was giving a music recital. He has been studying classical singing for many years, even though he used to play in my sixties rock band a long time ago, and is now a registered massage therapist.

But this was very different. The space, in the Lutheran Church of the Cross in Saanich, was beautifully bright, with wonderful acoustics. He and his co-recitalist Joanne sang works by Bach, Mozart, Caccini, Purcell, Gershwin, Tosti, Barber, and others—some together, some solo, with accompaniment by two excellent pianists.

My favourite piece was Simon's rendition of the crazy "La Danza" (which is almost a winking parody of itself—here's Pavarotti's version to give you an idea). Simon was smiling the whole way through, and both he and his accompanist Kim flew through it with great verve and skill. They received huge applause afterwards. When the recital was finished, Air and I joined Simon and one of his massage therapy co-workers at a nearby pub for dinner. We stayed overnight in a hotel, then returned home today.

The whole trip was a pleasant contrast from our last one to Victoria with the kids, just three weeks ago. No migraines, minimal medication side effects, and no one needed stitches. Yay!

Glad to hear you and Air had a better time this time in Victoria!