Back in the fall of 1995, after quitting as a full-time musician, I got a job at a magazine whose entire workflow ran on Microsoft Windows—something that was, and still is, unusual in publishing. I was someone with a long-time geek heritage and a passing familiarity with IBM PCs—as well as Unix, CP/M, and even TRS-80 and mainframe computers—but who had used only Apple II and Mac machines at home for more than a decade. So I figured I'd better get up to speed on Windows before I started the job.

My dad kindly loaned me one of his desktop computers, freshly booted up with Windows 95, which was then current and shiny new. The machine was underpowered, with only the minimum amount of RAM to install Windows 95, but I got the general gist of the operating system, and soon enough was the go-to technology guy at the office for many things. I returned the Windows box to my dad, and we haven't owned anything but Macs in our house ever since—10 or 11 of them over the years (I've lost count). Six are still actively working today.

So this view comes as a bit of a shock: 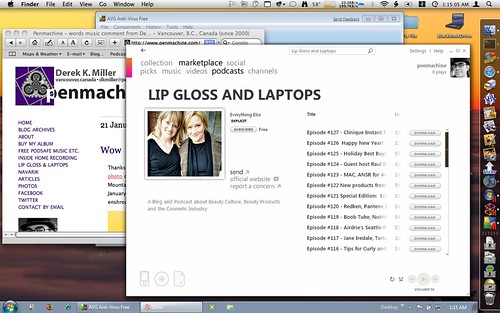 That's the screen of my MacBook, and you can see both native Mac programs (like Safari and the Finder) and native Windows programs (the Zune application and AVG anti-virus) running at the same time. I'm using Parallels Desktop to run both Mac OS X Leopard and the new beta version Windows 7 simultaneously. I can also reboot the MacBook into full native Windows 7 for extra speed and some additional interface eye candy.

Why did I do such a thing, and why install Windows on my Mac on January 22, the 25th anniversary of that famous Mac "1984" ad? Well, mostly because the Windows 7 beta is free (though if you want to get it, today is supposedly the last day), and it will work until August. I wanted to see how the new version is shaping up.

Because, honestly, I was falling a bit behind. After that magazine job, I worked at a Windows software developer for almost five years using Windows 98 and NT 4, then as a freelance technical writer working with NT 4 and Windows 2000. I only had a Windows laptop briefly when I first started at Navarik in 2003, then went Mac at work again. I never really did much with Windows XP, and I'm not sure I ever used Windows Vista at all myself, though I've seen others use it. As I said, our home was a Mac zone the whole time.

I needn't have worried. Windows 7 is a tweaked, improved, more secure version of Windows with better fit and finish, but it's still Windows. The Taskbar and Start menu and Windows Explorer are still there. So is the dreaded Registry Editor. As a listener to the Windows Weekly podcast since it began in 2006 (hey, I should listen, since I wrote the theme music—on a Mac), I knew how to get the beta version working best for me, and what to install for best results (Windows Live Essentials and Live Mesh, for instance).

In this new Internet age, with Macs more popular then ever, I have less reason than I did in 1995 to run Windows. But I like to keep current, and it's a bit of a thrill to see my MacBook boot up Windows like a real PC. Ahem.

Wanna play?
You be the PC I'll be the Mac. LOL

And what about Ubuntu ?

Tried that a couple of years ago on the same Mac. But there's nothing Ubuntu does that the Mac doesn't do already, so I uninstalled it. I do occasionally need to see what a website looks like on Windows Internet Explorer, and stuff like the Zune and occasional other pieces of software only work with Windows, so it's useful there.

Plus I have some friends and colleagues who might call on my knowledge of Windows from time to time -- but anyone I know who's running a Linux distribution like Ubuntu probably knows way more than I do already.

I cut my computer teeth on a Mac Plus. It did not have a hard drive and you constantly had to swap disks to get the thing to work. For Christmas of my first year at university I got a 20 mb hard drive and 2 new simms for it! I was in heaven to say the least.

Within about 5 years I wanted to learn more about computers and I got a win 95 machine. I have not looked back since. I have learned every windows operating system except for ME (the mistake edition).

Oh, and I love Vista. I have had no problems with it whatsoever. Many tasks are easier in Vista than XP. I know I am in the minority here...

Vista, as an idea, was tainted by early incompatibilities, poor marketing, and the huge delays it faced during development. Once drivers and software were updated during 2007, from what I saw it became a very credible operating system, and superior to Windows XP in almost every respect. But by then it was too late: the spectre of "failure" hung over it regardless of what it's actually like to use.

Windows 7, by contrast, has the buzz of "Vista done right," and I think it will be a success. As a Mac-head I still find much Windows workflow annoying, and other than the defaults, many of the Windows 7 appearance themes are shockingly garish, but I'm sure regular Windows users will find most things an improvement.

And for a beta, the current build of Windows 7 sure feels done. It certainly looks like it will be ready for release sometime this year -- a much better timeline than the seven-year XP–Vista span.

As someone who has actually already called on your Windows knowledge, I am kind of glad that you committed the sacrilege :)

I bought a new laptop hard drive and installed windows 7 on it (so I could go back in case of catastrophe) and used Windows 7 for about 2 weeks, including a business trip, to see how it would work in those kinds of situations. It didn't.

It was a perfect storm of situations: known faulty video card, beta OS and beta driver for faulty video card. While watching an XviD video in fullscreen through Windows Media player, it crashed the video driver. It tried to recover once, twice and BSOD. No big deal, it's a beta... I powered off and powered back on and... nothing. Something was overwritten, probably in the BIOS of the video card that broke it permanently.
Dell sent a technician out to replace the motherboard and I put the Vista hard drive back in.
I liked Windows 7, and I think (even though it's really just another version of Vista) that people will accept it (unlike Vista). I'd like to keep using it, but not until there's an updated driver for my video card. Warranty or not, I don't want to take the chance that I blow up a few more motherboards. Now I have to find something to do with this 320gb SATA notebook hard drive. :)

One thing I do have to say for Macs is that no OS or software update has ever fried any of my hardware.

There is also this perspective.

I am going to be installing XP on my mac soon. For very important reasons. The new Sims 3 is Windows only at this point. Tired of waiting for conversions, some of which never happen, by Aspyr.