How innocuous gay marriage has become in Canada

Thank you everyone for your outpouring of support and more than 50 comments on my last post, about the resurgence of my cancer. I'm pleased to know so many of you are thinking about me and my family. But it's also a bit of a bummer to have that be the thing sitting at the top of my blog for days and days, so now on to something else.

While surfing around the Web in the past week, I've come across a few banner ads from TD Canada Trust, presumably targeted at me because I have a Canadian IP address. Here are a couple of examples: 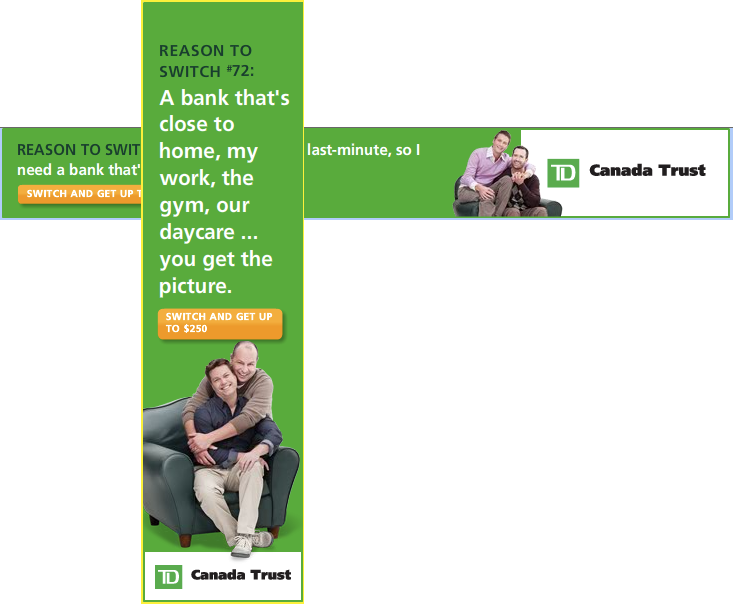 They're pretty run-of-the-mill bank ads, except for one thing: the couples in them are all men. (Well, in the vertical one, I think they're both supposed to be men.) The ads are presumably aimed at gay couples—who, as you will recall, have been legally able to get married across Canada since 2005—but the photos are the only element specifically focused at them.

Clicking on the ads doesn't take you to any special place on the TD site; indeed, once you get there there are just single individuals in the trademark green TD armchair.

Fifteen years ago, IKEA received bomb threats when it included a same-sex couple in a TV ad. Even this year, the company faced controversy in Poland for a similar print campaign. Including male or female homosexual couples in non-gay media advertising (however innocuously) has long been a hot-button issue, especially in more conservative areas.

But look at what's happened here in Canada. Same-sex marriage has been legal for almost five years. Many of us old-school straight couples now know gay people who are married (and yes, some who have gotten divorced). For all of us, life has gone on as normal. Yes, I admit that for me, even in Vancouver, I still notice a gay couple holding hands or leading their young children down the street—it hasn't yet faded into the background completely. Obviously, neither have these TD Canada Trust ads.

But for TD on the Web, including gay couples in their ads seems to have become routine, just part of the regular range of ad campaigns. That's a good thing, and our Canadian experience in general is good evidence against those elsewhere who claim that legalizing same-sex marriage will somehow ruin life for the rest of us. Even the big old conservative Canadian banks don't think that anymore.

I completely agree and this is a great post, thanks for this Derek. I think it's become such a socialized norm in Canada that making ads with same-sex couples is seen almost mainstream and run-of-the-mill. And to think that it's only relatively recently that we have legalized same-sex marriage!

I'm a cynic and black hearted. So when I see ads like this I think "Who gives a shit?" The beauty of all this to me is that it goes to show that cultural issue are not the same as political ones. This is fine, smug inducing stuff to show people from other nations until they point out our carbon emissions and the rigid inflexible attitude our current government has towards environmental issues.
30 years from now nobody will give a shit about some blip-on-the-map ad for a queer couple. It's so mindlessly unimportant it beggars belief.
But it seems political - doesn't it? - when in fact its anything but.
I'm not raining on the observation - just adding that what seems important "politically" really has no bearing on the truly political question of "who gets what and how".