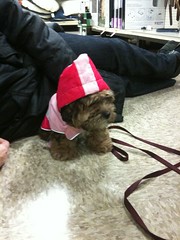 I promise not to turn this into a full-on dog blog, but at least indulge me during our first few days in puppydom here.

Puppies, it seems, are easier than infants, at least if my ten-years-removed newborn recollections of our kids remain accurate. A puppy needs lots of attention, yes, but it can eat independently, move around by itself, and learn to go to the bathroom outside.

However, I've discovered the sleep deprivation can be similar. Until we've figured out Lucy's nighttime patterns, we're all a little on edge, sleeping with one eye open to make sure she's okay and not doing anything untoward.

And we're housetraining her, of course. So while we don't have to get up nearly as often as you do with a baby, at least with a baby you can stay in the nice warm house. Training a puppy means trekking into the rainy yard at 4:30 in the morning. That can take a toll on your state of mind the next day.

But, just like a newborn, Lucy makes up for it by being almost painfully cute. In fact, my wife Air figured out that our dog looks disturbingly like an Ewok.

Congrats on the puppy! She DOES look like an ewok! SO cute...and you will be surprised how quickly you become "dog" people.

From my recent experiences, the dog is SO much easier than infant. We only had 4:30 mornings with Nikita for a weekend. Then, she was house-trained and that was it! At 7-months-old, Avery is still waking me up at 4:30am and at 3-years-old, Josh is still in diapers and not potty-trained! Hahaha...

We pick up our new puppy in about three weeks. I approach the date with fear and trepidation.

Derek, you might want to look into kennel or crate training especially for night time. Some people don't like kennels, but trust me, the dogs don't mind them and it gives them a space to go when they want to be alone.

I agree with alexiskienlen about the crate for house training at least. Dogs apparently feel secure in an enclosed space like a crate. It's their little safe zone. They also are reluctant to soil the area that they sleep in, not that it's a guarantee. Our Dolly slept in a crate for the first 6 mths or so and it worked out well for all concerned. Good Luck!