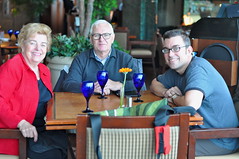 Today my parents flew to Frankfurt for a couple of weeks in Germany. They're staying with friends in Bad Zwischenahn, as well as visiting some of my father's relatives in Berlin, where he was born and lived until 1955. They had enough airline points to travel First Class, which I don't think they've ever done before.

Their trip is shorter than they had initially planned. My parents live next door to us in our duplex, the same house where I grew up, and they offer us a lot of support, especially with the kids, and particularly since I've been ill over the past few years. I told them a few weeks ago that their initial trip seemed too long to me. It was hard to admit that—I'm 40 years old and don't like having to depend on my parents again.

Yet it wouldn't have been fair not to ask. I have a lot of side effects from the cancer medications these days, and while we can handle not having my mom and dad nearby for a week or two, longer than that is likely to put a lot of pressure on my wife, and my daughters, when I'm not feeling well.

The three of us, Mom, Dad, and I, drove to the airport today, and had a fancy lunch in the Fairmont Hotel overlooking the jetway. I dropped them at the gate, then walked around the airport a bit and watched the planes some more. Then I drove home and spent an hour in the bathroom, as happens these days.

I'm sure they'll have a fun trip, and I'm glad they could go. I'll be happy to pick them up when they return too.

I don't know your parents that well, having just met them a few times at your parties, but I figure they were probably relieved that you were honest with them about this. In another family you wouldn't have said anything and then you would have suffered and there'd be resentment when they got back from vacation.

In a slightly different direction I feel somewhat ashamed that I am not able to help my mother and stepfather more now that they don't live too far away from me. They both have mobility problems (rheumatoid arthritis for one, parkinsons for the other) and I'd love to be able to do physical work for them or drive them places. But I don't have a car and I have to be careful about hurting my shoulder, so my help is pretty limited. Luckily they understand and wouldn't want me to hurt myself for their sake.

Nice shot! Hope they're having a good time.
Tania