What would you do for a Klondike bear?

A couple of weeks ago, my wife Air pointed out to me that the sidewalks in front of convenience stores throughout Greater Vancouver have recently sprouted large, inflatable polar bears promoting Klondike ice cream bars: 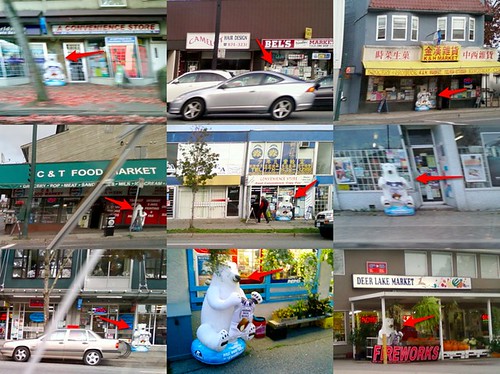 The Klondike promotions rep was obviously very busy around Vancouver in October. Both Air and I like the inflatable bears—they're cute, and large, and strange. Most effectively, they point out how many independent mom-and-pop style corner stores there still are in this city. I'm often tempted to assume that most have been put out of business by 7-Eleven and gas station shops, but that appears not to be the case.

My set of nine photos above resulted from my simply keeping an eye out for the bears during a couple of car trips on a single day this past week. Most of the pictures are from just one street, the main inter-city artery Kingsway. There must be dozens or hundreds of the beasts throughout the region.

One I didn't manage to snap is probably breaking the rules. On Canada Way, there's an independent Buffalo gas station that has covered the Klondike logo with a sign reading "HAND CAR WASH." That promo rep might be angry if he or she spots it.

I've seen those bears around too! They really do grab your attention.

Maybe I'm a bit of a nostalgic, but I love the fact that we still have lots of Mom n' Pop stores in this city. Thanks for the photos of the bears too! They're cute.