Step 1: put your pup in the box

It took a little over ten days, but we found ourselves a puppy! (I've posted a short movie.) 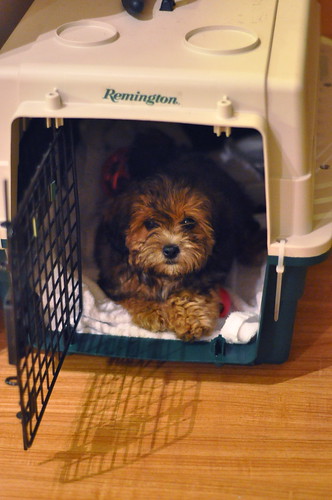 We've called her Lucy. She was born around August 25, 2009, and is half shihtzu and half toy poodle, making her a shih-poo, or, as I prefer the term, shpoo. Housebreaking Lucy appears to be the first challenge, but she has adjusted to our house and family shockingly fast otherwise. She is also surprisingly quiet for a little dog, which is nice.

She even kept me company in the bathroom during one of my bouts of intestinal side effects from my cancer medicine today.

Oh yeah, I also finally got an iPhone yesterday. But it doesn't seem like a particularly big deal now.

That dog is so disgustingly cute I want to barf sparkles.

And now I'm going to remember its birthday because it's the same as my mom's.

Hey, there was a guy that bred a Shitzu and a Bull Dog. They called it a Bullshit.

Oh my gosh, What a cute pup. And DARN rights Getting Iphone is a huge deal. Aren't you in love. You can do so many posts about your iphone, I would be so lost without mine.

That's true, but I got the phone because it's useful, not so I can write blog posts about it!