The end of the Wall 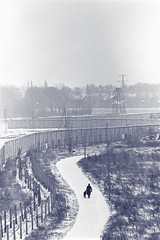 When I saw the footage of people hammering away at the Berlin Wall 20 years ago, I cried. I've never been there (the closest I came was Frankfurt Airport, three years earlier), but it's where my dad was born in 1939. Berlin has always loomed large in my family's history—through stories from him and my aunt, from my grandmother and step-grandfather, of the War, and the Blockade. And in the phone calls and letters to and from the city, where we still have relatives.

Berlin is where my grandfather Karl, my father's father, died in 1947. Thin and weakened in a Russian PoW camp, he returned to his family when the War ended, but never regained his full health. In the ravaged city, medical care wasn't quite good enough, or medicine available enough, to save him when he caught an infection—perhaps pleurisy, perhaps something else. With modern antibiotics and intensive care, he would probably have lived. And I would almost certainly never have been born.

My parents will be in Berlin again this week, able to cross back and forth across the city. The Wall is only shards now, the city and Germany itself now whole, if sometimes awkwardly. I visited Moscow and what was then Leningrad in 1985, while Russia was still fully Communist, though waning. Where today there are billboards, then the signs were only massive revolutionary slogans. To my children, the Cold War is history, long gone before they were born.

But it's not really gone. Current events emerge from what happened then. And my father told me that, a few years ago when he visited the village in the former East Germany to which he'd been evacuated late in the War, the buildings still had bullet holes in the walls.