The Lip Gloss and Laptops podcast shuts down 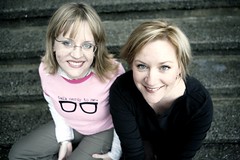 Yesterday my wife Air and her co-host KA posted their 150th and final regular episode of Lip Gloss and Laptops, the podcast they started way back in 2006. The blog will continue, with frequent updates about the cosmetics and beauty industry, but the podcast had become too much work.

As for the vast majority of podcasters, the LGL show was a hobby, not any kind of paying job, and so was only worth continuing while it was fun. When KA left as regular co-host earlier this year (she started grad school), the podcast became a lot more work for Air, even with other guest hosts in the interim.

And then my latest new cancer growths dropped our family into a yet more intense pit of chemotherapy and medical treatments and side effects and general hell, so that not only takes more of Air's time, but also makes it more difficult technically, since I've been the engineer and producer of the show since the beginning.

Nearly four years and 150 episodes is a pretty long run for a podcast. Lots of people will miss Lip Gloss and Laptops, me included, but it was a good time while it was going. And you never know—some one-off special episodes might yet appear from time to time.

Sad to hear but honored to have been part of it twice!

I enjoyed each and every podcast and will miss inviting your voices into my little space, but understand that life often directs our paths in other directions. Sending you healing light, Derek, and wishing you and your family only the best.

I have been with the podcast since the day that I discovered it but I do understand and will miss it. I will follow through both your blogs....Thanks to all of you

Congratulations on a great run, everyone. You have to be proud of all of your accomplishments.

Best wishes to everyone.

I will miss the show so very much. I thank you for the time and effort you gave and best wishes and prayers for the family and the battle you are facing.

I will miss the podcast soooo much! (Especially 'shag marry kill')

Thanks, Anonymous. I've fixed it to say four years now.