A brief visit to the 2010 Vancouver Camera Show 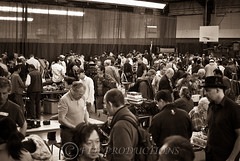 Today was the 2010 Vancouver Camera Show, held by the Western Canada Photographic Historical Association at the Cameron Rec Centre in Burnaby, near Lougheed Mall. I wasn't planning to go, but it turned out that my daughter Marina's new lenses for her glasses, which we got yesterday, were flawed, and needed to be replaced by the optician at that mall, so the two of us were in the area and had some time to kill.

Marina was enthusiastic—she was interested in looking at old Polaroid cameras and to see what the event was like. We walked from the mall, and I paid my $5 admission. (Marina was free.) And wow, it's a heck of an event.

The rec centre gym was filled with dozens of tables with thousands of items of photographic and movie equipment, most of it of some vintage, like the Nikon FE I bought the other day (or a bit newer, or a lot older). Cameras, lenses, flashes, tripods, bellows, enlargers, filters, parts—a photo geek's dream.

It was still very busy, even though we were there barely an hour before closing time. The crowd skews heavily male, and older, but Marina and I had fun poking around at the various obscurities, most in black and chrome, or maybe even leather. I didn't bring much money, nor did we buy anything, yet we hardly noticed the time pass before her glasses were ready and we had to leave. I didn't even take any pictures!

I'll plan to attend again next year, if I'm healthy, and to go earlier. Both Marina and her sister might like to come along, if their photographic interest persists until 2011. Honestly, if I'd gone myself, I probably could have browsed all day. But like a gambler, I'd have to bring cash in advance and set myself a hard limit.