A couple of years ago, I bought an old Nikon F4 film camera (introduced in 1988), and I've enjoyed taking pictures with it, especially in black and white. It's a pretty big beast, though, and over time I've been thinking about the first camera I bought for myself in the early '80s, a manual-focus Nikon FG. Then I spotted a surprisingly cheap deal on eBay, and this week it arrived: 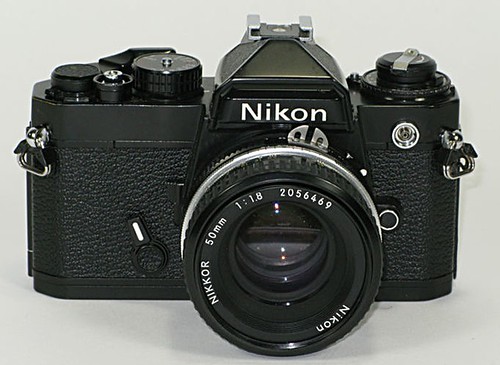 It's a Nikon FE, a slightly older (introduced in 1978) and slightly higher-end model than my FG, and it came with a manual-focus 50 mm Nikkor lens. For many years, the electromechanical FE, its companion mechanical FM, and their successors the FE2 and FM2 were often the backup camera bodies of choice for professional photographers—less expensive than the top-of-the-line F2, F3, or F4, but still rugged and simple to use.

Like my F4, this thing feels like a brick, because unlike the digital cameras most people buy today, the FE is almost all metal, including the lens housing. It's also surprisingly small, since it lacks the rubberized covering and big handgrips that digital SLRs like my D90 have. (Since film is out of fashion, the FE also cost me a tiny fraction of the price of the D90.)

Besides my general Gear Acquisition Syndrome and the dirt-cheap price, another reason I bought the FE is that my younger daughter L has been wanting to learn a bit more about photography, and the principles are much easier to demonstrate on an old film camera. With a fixed (non-zoom) lens on it, there are really only three things to adjust: aperture, shutter speed, and focus. DSLRs let you change ISO (sensitivity) and white balance too—among many, many other features—but with the FE those are determined by the film you choose.

I've loaded the FE with some 400-speed black-and-white film, and we'll see how the first photos turn out, and how the photographic experience compares to the F4 and D90. A nice feature of film cameras (despite the inconveniences) is that, whenever you buy new film, you're effectively putting a new sensor inside, so they don't really become obsolete the way digital cameras do.

Read the archived comments on this entry...