Backups mean not having to say you're sorry 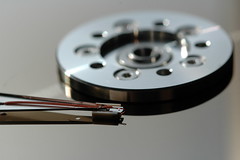 It turns out that my dead hard disk is still well under its five-year warranty, and that Seagate, the manufacturer, has an efficient online return system that helped me diagnose and then set up a return merchandise authorization (RMA) for it, including printing a shipping label for me.

So rather than go through the rigamarole of trying to rescue any data from the drive (as far as I can tell, it's not even spinning up), I mailed it off to Ontario a couple of days ago, and Seagate will send me a new replacement that I can drop in its place. In the meantime I'm using the stock MacBook hard disk, and it's working fine.

Because of my backup regimen, I lost so little data that all I've had to do is go through a few pages of my Flickr photos and re-import the missing ones into iPhoto—nothing else critical is missing. At least not that I've discovered so far.

So I should have a new drive to put into the MacBook next week, and I can use the one I have now once again as an external backup. One thing I do need to do is take some of my recent backups offsite, because right now I'm protected against failures, but if we get burglarized or the house burns down, important data could still be at risk.

You should do the same with your backups. You do have backups, don't you?

For online backup news, information and articles, there is an excellent website:

This site lists more than 400 online backup companies and ranks the top 25 on a monthly basis.

Any one can add their company in the directory. Just click on the "Search" button found at the top.

Susan wrote:
=====
My photos, movies, and mp3s are stored in four places--two USB drives, one offsite storage of DVDs (I do each January) that go in safe deposit box at bank, then laptop internal hard drives (for mp3s anyways). Backups used to be my job ;) and while I'm not 100% secure, I won't lose much.

Orvin wrote:
=====
I've got backups too. But here's a question ... if you do, have you tested restoring anything from them?

It sucks when your hard drive dies. But it sucks even more if you try to then restore from backups, and they don't work. All that effort for naught!

My reply:
=====
I got my whole hard drive back from my backup, except for those few missing photos, so that was a good test. I do check random files periodically to make sure they're good.

One smart idea is to set up a program to automatically get a back up for you. In Linux I use cron jobs to get me hourly and daily backups and in windows I use the Windows backup utility to take backups hourly. I don't know much about Macintosh thought (except that these folks have a wonderful browser called Safari, that is now available on Windows too, and I am using it for testing purposes of Web pages).

Good advice, D. My attempt to restore irreplaceable family tree information failed due to unrecoverable bad reads from a CD-R/W. I have tried data recovery services yet, but I might.

Having been burned a few times I've gone to an extreme backup regimen.

I backup my main (OS & applications) hard drive using Symantec Ghost to a second hard drive. As well, I use an online backup service that backs up critical things like business data and irreplaceable things like photos, etc. It costs about $5 US a month and it's "set it and forget it". I back up about 15GB with it. It's called Carbonite, and they're promising a Mac client in August.

Then later realized in the event of a fire, or other disaster, I'd still lose everything.

I still have NO way to back up my mutiple Terabyte arrays, but they're mostly music, videos, TV Shows, etc. These I can recover easily. They're at least RAID-5, but I've had to rebuild them several times and that can take literally 4-5 days.

I have to say I'm impressed with Seagate. I already have a notice and tracking number for the new drive on its way back to me, which I should receive Monday -- less than a week after I sent out the old one.

I found the backupreview site very commercial to the point of having all the appearances of an advertisement site. For that reason I did my own research and can independently and without fear or reward recommend the following as excellent online backup offerings.