The curse of the MacBook 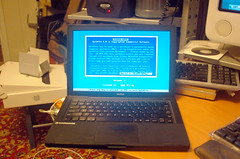 I thought that a few months ago, when my MacBook laptop finally returned from getting a new heat sink, fan, and battery, it would be stable. But no. Today I was working away, just having uploaded a bunch of photos to Flickr, when the MacBook froze up, which is unusual. I rebooted it.

Click click, said the hard disk. No booting. Grey screen, as if there were no disk inside at all. Not good. This disk is completely invisible to the utilities I own, as if it wasn't even there. I have backups, and very little data on the drive doesn't exist somewhere else, so that's not my worry—I learned my backup lessons years ago.

But it is certainly annoying. The 100 GB, 7200 rpm SATA disk drive is just over a year old: I installed it when I bought the MacBook, putting the stock drive in an external USB housing. It should have lasted much longer than this, but I suspect that all the nasty sudden power shutdowns with the battery problems I had may have damaged it, so that it decided to die today.

I'm typing on the MacBook now, having restarted from my external FireWire backup drive. I've reinstalled the original stock 80 GB, 5400 rpm hard drive and am copying over my data files so that it will work again. It should be in relatively normal shape later tonight.

But I'm not giving up on the bigger, faster drive yet. I don't trust it, but I want to see if I can bring it back to life again. The excellent DOS-based utility SpinRite apparently performs miracles on dead drives like that quite regularly. My dad owns a copy, but it's not intended to run on Macs, and sure enough, when I tried booting his CD on the Intel-based MacBook, it started up fine, but did not recognize the keyboard, so I couldn't do anything.

I'm going to see if I can get a SATA-to-IDE adapter to hook up the disk to one of my dad's Windows PCs, which will run SpinRite and may be able to get the disk working again.

Regardless, I will probably have to get another new internal drive (maybe a bigger one now, 160 GB or 200 GB) as the main one for this machine in the long run. I like this laptop and it has done great work for me, but it's sickly, to be honest.

Is that a bigger hard-drive in your pocket? Or are you just glad to see me?

I had very good luck with Data Rescue II. Saved my bacon when my drive failed and I hadn't done a backup in over a week.

My laptop switches off with no warning. It's the overheating. It turns off on its own for protection. Maybe it's that with your MacBook?

Not in my case. A new battery fixed the problem, but by then the hard disk had been subjected to numerous sudden shutdowns.