Better headphone adapter for the iPhone 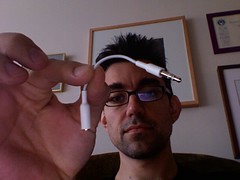 One of the complaints that many people have made about the Apple iPhone is that the headphone jack, while a standard size, is so deeply recessed into the case that nothing but the extra-thin Apple headphone cable will actually fit.

That was also true of the weather-resistant Sport Case for the original, stick-of-gum iPod Shuffle, but that case came with a nice little adapter cable, of which we have a couple kicking around the house. I use them for the extra-chunky end of my big Sennheiser HD280 Pro headphones.

So, rather than shelling out a lot of money for third-party headphone adapters, I'd recommend that you hunt around for a discounted Sport Case, whose adapter looks more elegant and might end up being quite a bit cheaper.

Nice detective work - seems to me like Apple should include these with each iPhone because I've read that most, if not all headphones, have trouble fitting - I'm sure they have a big box of them somewhere in Cupertino. On second thought, Apple will probably package them up and sell them as the 'Premium Apple iPhone Headphone Extender' for $14.99 lol.

Found your post from Daring Fireball. Thanks for figuring this out (and posting it). FYI -- You can get the official Apple iPod Shuffle Sport Case on eBay from $0.99 each. I just bought two, but there are plenty more to choose from. Definitely cheaper than Belkin or Griffin Tech -- and you get a shuffle case as a bonus!

While it's no good that so few microphones fit in the small form factor that the iPhone provides.. I also think it's about time 3rd party headphones didn't utilise such clunky jacks. There is no purpose for them to be so large and I have broken a few audio devices because the headphone jacks sheath has been so large(and weighty, but why??) that it acts as a lever and pries the the female-connect off it's PCB (usually by just walking or running with the device.)

Ah, so this is where that came from! I've had this sitting around for as long as I can remember but wasn't sure which iPod I got it with. When I read about the recessed headphone jack this little guy sprung to mind.

Thanks for reminding me where it came from!

Great tip! $3.79 after shipping on eBay. Can't wait to use my Bose QC3 headphones with the iPhone on some plane rides.

EXCELLENT! $4.04 after shipping on EBay. Has this already been confirmed to be compatable with the iPhone as well? (I suppose I'll find out...)

All you need to do is take a regular headphone jack and shave some of the plastic off--it should fit fine into the plug-and save you $10.

I found your site looking for iPhone headphone tips and your is a great one. Got a great deal on eBay, so thanks. I then skipped to your main blog page to see what other cool tips you had. Imagine my surprise when instead of technology, I found that you're currently recovering from cancer surgery.

Best wishes, keep up the good fight, and thanks for a great tip!

How about just using a razor blade and your existing headphones?

Hey Derek...you selling your cable? I could use it for my iPhone! ;)
I hacked up the end of a cable to make it work in my car but it looks pretty scary.

Nope, sorry, I still use it all the time!

Great idea with the shuffle sport case- HOWEVER - be careful - An enterprising individual on ebay is now selling the case w/o adapter and then selling the adapter as a separate item.

ah! so that's what i need to do. thank you! enjoyed flipping through your blog, too.

God bless during your treatment, too.

While it's no good that so few microphones fit in the small form factor that the iPhone provides.. I also think it's about time 3rd party headphones didn't utilise such clunky jacks.