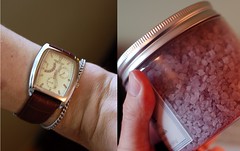 Twelve years ago I awoke to a cloudy morning, threatening rain. I didn't like that. My girlfriend was a few kilometres away in North Vancouver, similarly dismayed. But things improved.

Within a couple of hours the sun was shining through, and I was standing nervously in a tuxedo at the Hart House restaurant in Burnaby. Outside were chairs and a red carpet, and a dais beneath a large tree by the lake. Guests arrived.

Not much later, so did my girlfriend, in her dress, and Van Morrison's "Crazy Love" played on a boom box as she walked down the aisle and we were married. We ate with our relatives and friends, and then drove back to my parents' house, not far away, for a reception.

Today, we exchange simple presents on our twelfth anniversary, and later she and I ate out again, at The Cannery in Vancouver, also not far away.

We've been through a lot of shit together in this past decade and a bit. It has been a great time. I love her more than ever, and hope to continue for a long time to come.

Congratulations you guys and hope you had a great A-day. Here's to many many more.

Happy Anniversary for the both of you.

Congratulations to you both! I hope it was a really great day!

That made me blubber! Congrats guys,

Congratulations Derek & Airdrie. We remember that day very well, in fact; I have a picture of John & I sitting here on my computer desk that was taken at your wedding. It was a wonderful day :) You two are amazing together :)

Happy anniversary!
Thanks for sharing the memories.