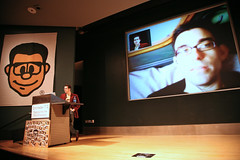 I love attending the annual Gnomedex geek conference in Seattle, but this year I just wasn't in shape to do it. So we did the next best thing: organizers Chris and Ponzi Pirillo asked me to give a little talk and answer some questions via live video chat yesterday, and I think it worked rather well.

Even among the digital leading edge who attend Gnomedex, being as wide open about cancer diagnosis and treatment online, as I have been, is still a bit unusual, but I hope that my appearance there encourages people not only to use the Internet as a way to get information and support, but also to get themselves checked out for the various diseases they might be at risk for, so that they can maybe get treated early and not have to go through all the crap I have.

One of the audience members who said hi (I think her name was Dawn) also reminded me not to get consumed by all this, not to let my condition become my life, and I think that was good advice. As I've said before, I'm trying to come back to life, to see movies and have fun with my family and friends, and to blog about something other than cancer from time to time—and more often as I get better.

Today I cooked some bacon and eggs and made coffee, which is the first time I've had enough energy for that. But yesterday I spent almost the whole day (including my video chat session) in bed. Maybe later today I'll get out for a walk, or go to the mall or a restaurant. I just have to see how I feel.

Thank you to all the Gnomedexers who attended my session yesterday. Once again, your support and good vibes humble me.

It was great to see you, even if it was thirty feet tall on a screen. I thought you did really well. It was scary enough for me to speak to that crowd, and I wasn't talking about health, life and death.

Well, I sort of was, but far more abstractly.

I have been following both your blog and your father's for updates. I agree with Dawn, who said don't let it consume you. However, this is easier said than done.

I was glad to see you up for some video. You blew away Gnomedex with the reality of your situation and your openness. So necessary...

i say " let it consume!" if you so see fit!!!! i mean... honestly, it's been like BARELY a blink of an eye since the major surgery m- SERIOUSLY! today i had a woman 3 days post op a cerivical disc surgery (suposedly minor pain - my personal belief is that everything hurts!!!!) screaming for IV pain meds or else she was going home!!! OY!!!!

dude, you are doing awesome. it may not feel that way, but you are! hang in there, and do what ever it is you need to do, just like i know air and your girls and your folks have the support and permission to as well. your posts give me humanity!

ps- i tried to simpsonize myself like 3 times and it wont work. is this cause i dont know what a squishheeeeee is?

Just a nobody in cyber space who can't afford to make the conference but watched it cast via the net and caught your talk. I do think you are right about the net bringing people closer together and not isolating people as what was once thought (about the time Al Gore invented it). It allows people to interact with outcasts in some societies with others around the world who don't seem them as such. It wasn't too long ago that the sick were put in homes or rooms and forgotten to all but their family, even friends return to their lives after a while. I subscribed to your blog because you are not like me and allows me to understand a different part of the world differently. I've spent a while in my life very sick and in bed which is what turned me into a net geek. The net was my connection to the world and required the least amount of effort, effort I used to recover. Do the same my friend and God speed your recovery.

Your casual wit, thoughtfulness and enormous mug were a total highlight (and really one of the tamer) of the event. At first the audience didn't know how to react but by the end, everyone was standing with your friends, hollering and clapping (a few tears too eh). Can't wait for your health to return (cause i need some more penmachine songs for my podcasts!). See ya this weekend i hope!

PS I was beaming from your plug the rest of the day ;-)