My love is vengeance 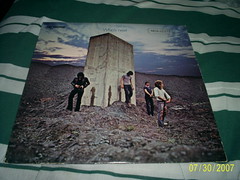 I'm just lying here on the couch, reading my RSS feeds and listening to The Who's 1971 "Who's Next" album for the first time in a long time. Holy crap, I'd forgotten what a great piece of work that is.

As Dave Wilson wrote in Salon a few years ago, somehow even infinite replays on classic rock radio have failed to dilute these tracks. Pete Townshend magically turns out not only to have created some of the greatest, most muscular guitar sounds in the history of rock 'n' roll, but also to be a genius with the primitive analog synthesizers of the era, which no one would have expected. Roger Daltrey makes his case to be among the best rock singers—powerful without being shrieky, cheesy, or slick. John Entwistle uses his bass both to anchor the rhythm and to fill in the melodies behind Townshend's power chords in marvelously creative ways.

And Keith Moon, well, what can you say? I've written about him before, how he's always been impossible to emulate because his drumming reflected the same unhinged personality that led to his early death. He was, it seems, incapable of playing quietly or subtly. So on "Who's Next," even the softest ballads seem on the verge of a complete train wreck, which is just the sort of tension rock music needs.

And then, of course, there is The Scream, 7 minutes and 45 seconds into "Won't Get Fooled Again." It should have become self parody after appearing in car commercials and following David Caruso's witticisms at the beginning of every episode of CSI: Miami. Yet still, when I listen to it in context, after the long, burbling synth interlude and Moon's edge-of-chaos drum intro, Daltrey's "Yeeeeaaaaaaah!" still gives me goosebumps every time (he sang it so loud that the microphone actually crackles with distortion), and the guitar that follows it is my own Platonic ideal of what overdriven chords should sound like.

Anyway, if you like The Who, or any band that owes them a debt, from AC/DC to Green Day to every emo-pop-punk group of today, go listen to "Who's Next" again and give it its due.

you don't know me. fellow blogger. found your post on Who's Next today. You've really been through an ordeal and I'm glad you could enjoy listening to The Who today.

One of my "desert island discs" to be sure. If you ever get a chance to see or download (for evaluation purposes only, of course) the VH1 Classic album episode featuring this album, it makes you appreciate it even more..

It's where I learned that "Goin' Mobile" was basically recorded live from the floor, minus vocals... What a song, what a guitarist, what a band.

Man the keyboard line in 'Who Are You' makes me sing along EVERY TIME. I fucking LOVE the sound of that patch, you know, right at the point in the song where the low, bass wahed out sound kicks in and then Townsend's power chords come in.
I must agree with you Derek, the Who definately rock, rule and remain as one of the best all time Rock And Roll bands.

Glad to see you're at home and kicking some ass now Derek bro.

Jenn and I wish you all the best.

trying to get a photo for Ralphy

I will always be a slave to the organ solo in "Won't get fooled again". I could listen to it over and over. I got a chance to see them long ago and very glad that I did.

My older cousin gave me this alblum when i was about 12 years old and I can remember loving it. Played it to death. I tried finding it years later (home at summer from University) and alas - my parents must have thrown it out. And now, reading this post, I am kicking myself because I was in London a few weeks back poking around a Camden Market 'record' shop and came across a double CD special edition Who's next. Damn my convert to Canadian dollars mentality - at 14 pounds it would have been a steal...