Taking it to the Strip 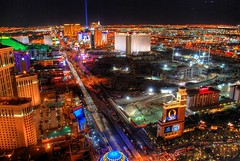 My wife and I have always had a good relationship, and not just in the stereotypical sense. We're lovers and partners and parents together, of course, but we're also pals, best friends. And while the past year has Sucked in a Big Way so far, it has also, in some ways, forged our bond even more strongly.

First of all, last year, before my cancer diagnosis, my wife made a rather sudden and delightful transition from putting up with my web-nerd geekiness (in a wifely way) to becoming a web geek herself. She started her own podcast, and then took off into realms I haven't touched, including helping to organize tech conferences, going whole-hog with Second Life and Twitter, and finally pulling me, heels dragging, into Facebook. I hope I've been able to make finding her inner computer nerd a little easier.

Going the other way, she's proved incredibly supportive during my cancer treatment, and I hope that in going through this awful experience, I have also come to be able to conceptualize some of the shit she's gone through in her own life. I don't know if a man will ever know what childbirth feels like, for instance, but I now know how a perforated bowel and blocked kidney feel, as well as a not-quite-effective epidural anaesthetic. And that's just the start of it.

There are a lot of times now, good and bad, amazing and heartbreaking, when she and I can simply give one another a look, and understand. Not always, of course, but I feel closer to her now than I ever have.

In a way this is all background for what might seem like a shocking thing for her to do less than two days after I left hospital following major cancer surgery: she's flown out of town with three girlfriends for a party week in Las Vegas.

"B-b-but she's supposed to be taking care of you!" I imagine the traditionalists might sputter. "How could she possibly leave town? For Vegas?!"

And that's why I wanted all the explanation up there. Because she booked this trip a few weeks ago, when my surgery date was still in flux, so we knew full well that I might end up in some sort of treatment hellhole just as her ticket dates came up. But in 2007 so far we've already been through so many canceled trips and sidetracked fun times and so much crap. We talked and talked about it, and of course she should go. Even if I were still in hospital, she should go. Not cancel another trip, but take that trip, dammit.

As it turns out, my parents (who live next door) can take care of anything I need—including our daughters, until the in-laws pick the girls up on Tuesday—and I'm genuinely feeling better than I have for months and months. I mean, I was cracking jokes while being wheeled from Recovery to my ward, more then nine days ago. I've had a few setbacks in between, but I'm feeling emotionally great, if physically drained.

So I want my wife to spend this, my first week at home where I'm mostly just snoozing and shuffling around slowly anyway, to have a big blast of a good time on the Strip, partying at night and hanging out at the MGM Grand drinking huge poolside beverages during the day. I can't go right now, so I want her and her friends to have enough fun for both of us.

I think that having her do that while I get better here is a pretty accurate measure of how good we are for one another. It's realistic, it's fun, and it feels good for everybody. And, more important, neither of us gives a damn if somebody else thinks we're wrong about that.

these are some amazing words. i feel that my girlfriend and i might share an ounce of what you and your wife have, and i feel lucky to have that ounce. good luck in your recovery.

Well, I left my own husband and his cancer for 10 whole days in May, and we both agreed it was the best thing to do. It was for work, but I also had a great time there with my colleagues, and I could have cancelled, everybody would have understood.

We balanced before I went, of course, and discussed it a lot, but thinking it through it was for the best. I really needed a break, and nothing major was happening right then.

Hooray for functional relationships! Hope she has a lovely time, and that your recuperation is comfortable!

Vegas is a freak-show. I must sleep soon. Love you much. :)Air

Dude, you don't even have to explain it! As a listener of Air's L&L podcast my heart swelled upon hearing of your latest surgery. You can tell how much she loves you, and you her. It makes me hopeful that one day I'll get to find that "best friend/lover/husband". It is possible.

Yes, her going to Vegas was a must and I hope she has a great time.

I'm also very happy to see you blogging. I mean really happy, it brightened my day.

Take care of yourself. Get well soon and make sure to pay your "nurse" and "secretary" for their hard work (kisses are good compensation)

As someone who's had surgery for Crohn's (although not on your scale) and had to deal with some pretty miserable pain, I can tell you that my experience was on par with childbirth. Except that, with childbirth, I knew the baby would eventually come out (56 hours later) and that the pain would stop (mostly). And, with a baby, you've got something to keep you excited for a while. So you may actually have been in as much or more pain as someone who's given birth. I think.

Good to see you sort of up and around.

I've always wondered myself whether childbirth was such a unique experience regrding pain as it is often said to be.
Anything that justifies morphine drips belongs in the "unbelievable pain" category (sorry Air and others, but as a passionate childless person, I just feel like saying it). Derek, you've had your share.
That said, I guess it will ultimately do you good to be separated for a few days.
Gell well soon, Derek!

To your wife: Have fun!

To Derek the Man: Good to have you back at home.

You are one awesome man and husband....my prayers are with you

Such a heartwarming post. I am rooting for both of you!

You and your family are in my thoughts and prayers, Derek.