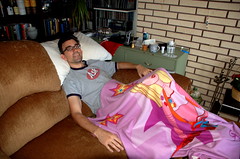 I'm now fully ensconced here at home on our fantastic recliner couches, with food and drink and excellent "nurse" and "secretary" service from my daughters (who were alternating those jobs in 15-minute shifts until it turned into a fight). Plus the real work in sweet care from my wife too, of course.

I finally weighed myself this morning. As I noted some weeks ago, I had lost about 25 pounds (11 kg) between Christmas and my recent surgery, which was drastic enough. As of today, with a week of not eating at all or hardly eating in the hospital, I have dropped another 15 pounds—or 40 pounds (18 kg) total.

Time to start getting it back. More Cheesies, please!

My son has weight issues due to some medication he's on. His doc told us a shake a day will help. Nothing bad about that deal. :)

Wow, I bet you're glad you got those great recliners! It looks a little more comfortable than that hospital bed...

Hey, Derek. Glad you're back home.
Alan from EAC

If I could email Cheezies to you, I would.

Yup, the Barbie blanket was courtesy of my daughters. It's very comfy fleece. And my wife bought two huge bags of Cheesies, so I'm set.

Alas, the shakes are tougher, because I'm also diabetic, so I have to watch my blood glucose levels. Otherwise I would have been chugging those already. Complicated!

Just checking in on ya. I hope you're feeling much better! :)

I linked your blog on my Sunday Samplings feature. Hope you don't mind!

If I didn't want links, it would be silly of me to put things on the Web. :)

Some of that additional weight loss is the loss of actual tissue during the operation, among which was this insidious mass called cancer. Good riddance to that!

Good point. I'll have to replace it with some nice fatty food.

Derek, glad the treatment is progressing and happy to see you out of hospital. Hope you are feeling better soon.

Hi Derek - saw you on Tish's blog. That recliner looks terrific....wanna share? Oh and sharing those Cheezies sounds good too (but don't tell my Mum K?)

Hi Derek! Glad to hear your surgery went as well as it could have. Morphine withdrawl sucks -- I've been there a few times, unfortunately. But, it does get better with good managed care.

Thanks for keeping us all posted... Better buy a gallon of ice cream to get that weight up!

ps: is there such a thing as diabetic-friendly ice cream?

Yup, it's labelled "no sugar added" and, while I still have to keep track of its carbs, it has not nearly the glycemic index of the regular stuff. I've had a bowl and a shake made with some today already.

Glad that you're home.. Get well soon man.

I recommend nuts (if you're not allergic)! Calorie-dense, most are very low in carbs, but full of healthy fats. You can carry them anywhere, and they keep for a long time. Keep them handy and munch all day long.

I'll have to check, but if I recall correctly my ileostomy means that I should avoid most nuts, which is too bad if true.