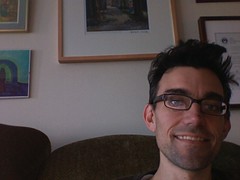 I haven't blogged, or read or responded to email, or done much on Facebook, because I am so, so tired.

The biggest bothers of recovering here at home are that fatigue, which is quite unbelievable (walking a block and a half is like running a marathon), and some persistent pain I'm having in my butt, part of which is due to a minor bedsore I developed during my last hospital stay. I went to the Cancer Agency today to talk about that, among other things, as well as to talk to a counsellor for the first time in my life. I'm maybe half-way through my treatment now, and it is a grinding slog, so it will help to have a professional to consult about it.

Tomorrow I'll also talk to Dr. Phang, my surgeon, about the pain and what I should do about it. It's all about the doctors and hospitals and clinics right now. And eating. I'm eating a lot to try to gain some weight, though I'm not sure if that's working yet.

Have a good long weekend. I'm hoping mine's a bit of an improvement. Don't forget that my dad is also blogging about how I'm doing, sometimes in more detail.

Keep on keeping on my friend. You're doing great considering everything that has happened so far.

Also, just like short walks that lead to longer ones, start Guitar Hero on Easy. No one becomes a shredder in one day.

Glad you're making progress Derek, even if it's not as speedy as you'd like. Hang in there.

My God Derek, you and John could be the same. Both your progresses are identical. I know that your illnesses are not the same, but your surgeries were and the aftermath and all the side-effects have been exactly the same. John is still prone to bouts of extreme fatigue; it's one of the last things hanging onto him. Also, he had developed blood clots in both thighs, which have only now just been dissolved.
You are making progress though, even though it doesn't seem that way much of the time. Hang in there and let everyone care for you. And don't overdo it; let your body get caught up.
Lots of love from us both .....
T&J
xxxxx

Your Uncle Ray will be back in the next few days and we'll be over to see you as soon as we can and you all must come over to check out the new playhouse. I have some King Crab and Ribs ready to go...your dad's favorites....well, maybe we can make him a steak. We love you Derek.....Sirkka

Hang in there Derek. I know it is easier said than done but keep up that positiveness even when it just doesn't seem like things are improving fast enough. Sometimes you have to go slower in order to go faster. Hang in there. You CAN do this.

Wow, you'd never seen a counsellor before? You must be, like, well-balanced, or something. I've seen different ones for years just to deal with life in general.

With all that's going on, every picture has you smiling -- that is powerful, and WILL make a difference in your battle.