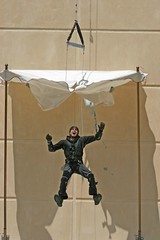 As I've mentioned a few times, this year MythBusters has turned into my favourite TV show. My wife and oldest daughter like it a lot too.

I've now found my favourite quote from the show. One member of the build team, Tory Belleci, is joking around in advance of possibly launching his coworker Kari Byron into San Francisco Bay with a water-bottle rocket. When she's a little upset, he quips:

Kari's too nervous. No more joking. Let's grim up.

Grim up. A great expression I hadn't heard before. The stunt ended up being too dangerous, so they launched a dummy instead.

"Grim up" is a great expression. It's a wonder it hasn't caught on like "man up". Tory needs to put it on a T-shirt like Adam does with his expressions.