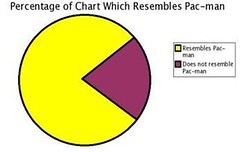 Your friend and mine, Pac-Man turns 28 years old today.

I never had a full-fledged case of Pac-Man Fever, but I did spend a good amount of time playing clones like Gobbler, Snack Attack, and Taxman on my Apple II. Plus I had the September 1982 Mad magazine with Pac-Man on the cover.

The Nintendo version is now available as a cheap download or disc for our Wii, or even for my iPod—maybe I should give it a spin for nostalgia's sake.

Though strangely now I'm just hearing Mathman in my head (from the PBS show "Square One"). Might be a bit after your time.

I'm ten years older than Pac-Man (though I thought Pac-Man was younger, so maybe that makes me feel better). And you're right, Mathman is meaningless to me. I was a Sesame Street, Captain Kangaroo, and J.P. Patches guy.

I remember Snack Attack. I played that a lot on my Apple IIe. Gobbler too.
Is there a good Pac-Man or clone that can be played on a PC? (I'm a Microsoft girl these days.)

Alas (or fortunately, depending on your perspective), I'm a Mac guy, so I don't know -- I'm sure there MUST be a good Pac-Man on Windows. Try one of these links: