Whither the Apple subnotebook? 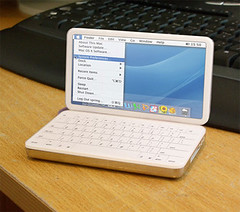 Ever since Apple replaced the trusty iBook and PowerBook G4 series of laptops with the MacBook line in 2006, Apple fanboys and -girls round the world have been clamouring for a smaller, lighter ultraportable Mac, along the lines of the 12" PowerBook or 12" iBook like my wife owns. The 13" MacBook (like mine) is a fine computer, but it's not quite as backpackable as its predecessors.

Now that her iBook is coming up on its third birthday, my wife might appreciate fresh rumours that Apple might be announcing a super-thin MacBook in January. These rumours have been around forever (almost as long as those about a Mac tablet), but they're picking up steam this week.

I wouldn't place any bets, but if you're in the market for a small Mac notebook (rather than a ginormous one, which Apple has been happy to sell you for years) and can wait till January, you might just be in luck. Or not. You never know with these guys.

Does this tiny 12" Mac run a normal Mac Os or a reduced edition? Does it also cost more or less normal Mac laptops?

Thanks in advance dude!

Just to clarify: the photo is a fake mockup, and the idea of a Mac subnotebook is just a rumour at this point. So there are no details of any sort that anyone can rely on.

My guess for January is, if Apple introduces such a device, it will run the regular Mac OS, and will cost more than the MacBooks, and less than the top-of-the-line MacBook Pros. But I could be wrong about all of it, and just like every other time this rumour has arisen, Apple might not introduce such a notebook at all.

hehe,
yes now that I am thinking it over, that screen was definetely smaller than 12 inches, of course! Oh my God, I feel like Mr Bean now.