I've really liked Dr. Pepper pop since I was a little kid. After I developed Type 1 diabetes in 1991, Diet Dr. Pepper and some of its variants have been favourites of mine too. But the new Diet Cherry Chocolate Dr. Pepper is simply vile. 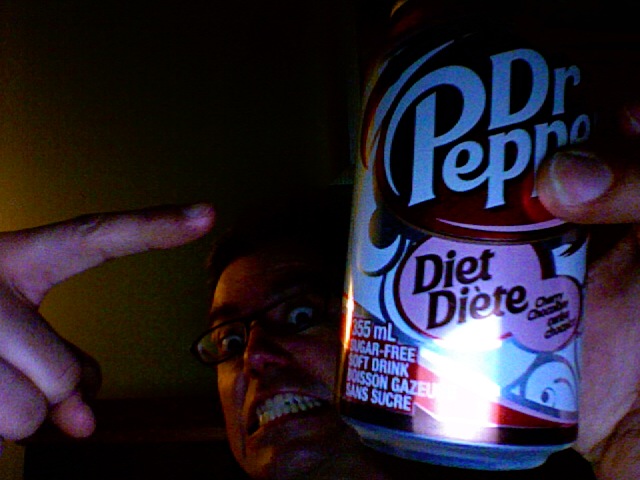 Chocolate is a good idea most of the time, even with cherries. But combined with Dr. Pepper? Nope. I bought some a couple of weeks ago, and my family has only now managed to drink the last of it. My wife says it tastes like "bad medicine." My kids think it's tolerable only when it's very cold—and normally they'd fall in love with anything even remotely resembling a carbonated beverage. It is even more repulsive than most other sodas when warm.

What I want to know is why plain old and delicious Diet Cherry Coke remains unavailable in Canada. Forget the weird flavour combinations: if I can get that stuff without having to make a run across the U.S. border, I'll be happy.

Hahahaha!! That picture of yours is simply great

Diet cherry chocolate does sound like it should be more of a medicine than a soft drink. I had a gingerbread latte today and experienced a "blah" effect as well. Some combos are just not meant to be.

that is the best picture of all time.

Gosh! I grabbed a can of this stuff last month at the grocery store thinking it was simple Diet Dr. Pepper. When I took a sip later I did spit it out all over the dog.

Vile is not a strong enough word for it!

I'm glad to see it's just not me (and my sister since I made her try some later) who finds it a hideous drink!

Likewise, for me, with Coke Blak. Tried one sip, and had an upset stomach for several hours. Blecchh.

dirty, dirty ... dirty! I'm always keen to try the new diet flavours, pepsi had a few good trials last year and thought the Dr Pepper would be good. It was not.

I wish I had read this earlier. Sadly it has come too late to prevent me from tasting this horrific beverage. I'd say it tastes like a liquified Tootsie Pop but that might give a positive impression so I'll say it has the taste and mouth feel of drinking a liquified Tootsie Pop while chewing aluminum foil and licking a 9-volt battery

I like this flavor, but as a standalone drink; it's definitely not to accompany a meal. Like I said on another blog, put some VODKA in it! Yum! The Cherry Vanilla flavor is the best(and this is coming from someone who cannot tolerate a strong vanilla flavor).

I would like to see this flavor be available a few times a year, maybe at Valentine's Day and around Xmas(the main times that people buy chocolate covered cherries).

P.S. I bought a 12-pack of one of the Pepsi Jazz flavors... it was so bad that I poured all that swill down the sink and saved the cans for recycling! Yacc, save yourselves!

I'm glad you brought your most rational arguments and thoughtful language to this debate. I appreciate your kind contribution.

This is also continuing evidence that, on the Internet, you can find an enthusiastic fanboy (or girl) for pretty much anything.