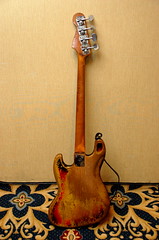 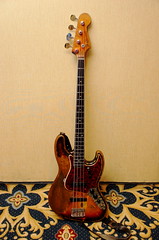 Last night I played drums in my first gig with my band since back before my cancer surgery in July. It went quite well, even though this particular lineup (Mark and Adam on guitars, Rick on bass, and Christian and I swapping drum and percussion duties in case I got too tired) had never played together before.

We set up at 4 p.m., finished that by 6, went out for dinner, returned and started the show by 10, finished at 12:30 a.m., and then packed up and hit the road by 1:30. However, as expected, after getting home at 2 a.m. and then running a bunch of errands after I got up today, I crashed out for a three-hour nap. My wonderful wife took the kids swimming while I was asleep. (Notice how, for two and a half hours of actual playing time, the band actually spent ten hours on call?)

It makes sense that I would be tired only a day after my latest chemo treatment ended. I'm certainly in no position to play as often as I used to, for the same reason I'm still on medical leave from work: my body is taking a lot of punishment from the cancer treatment, and is very slow to recover. I was sore all over today, as if I'd been skiing, and my hands in particular—which seem to be showing the brunt of the chemo side effects right now, with dry skin and strange discolourations—are particularly thrashed. (Part of that is that I've hardly played drums all year, so my usual callouses are gone.) I had to take off my rings today and have been slathering both of my mitts with moisturizing cream.

In fact, my hands somewhat resemble the heavily worn 1966 Fender Jazz Bass guitar that Rick, our bassist for the night, has owned since 1979. It's pretty much stock, with the same body, neck, pickups, and hardware installed at the Fender factory during the Beatles' heyday. Rick is the third owner, and the bass has always been his main instrument since he bought it, seeing thousands of performances. The sunburst finish is almost entirely worn through, front and back. There are actual grooves in the body from where the coin he uses as a pick has made its mark, but even more astonishing, Rick's fingers have very gradually dug channels into the wood over the years too.

Rick's bass is probably the most beat-up playable instrument belonging to any musician I know. It's quite beautiful in its own way, with the history of over 40 years of heavy playing (almost 30 of them Rick's) etched into its surface. It's a player's bass—some collectors would weep at its condition. Other people are happy to have Fender make them a brand new bass and then bang and bash and wear and scrape it up as if it had been played for decades. But as Doug (our other bass player, who has his own beat-up basses, both vintage and artificially "relic" treated) says, it's not the same.

Regarding the bass, and the fact that some collectors might weep at its condition, it would be a bigger tragedy by far for a 40 year old instrument to have never been played, but be locked up in a collector's vault like gold bullion or a stock certificate.

This bass has made music; it has brought joy to both the player and the listener; it has been used as it was intended to be. Yes it is battered and dinged, but hey, most musicians get that way after four decades :). Like laugh lines and grey hair, each ding and scratch, each scuff and scar, is evidence of an active musical existence. And that's the way it should be.

I totally agree, and in Rick's case it's particularly good because his bass has adapted to his playing. I'm not sure someone else's worn instrument would fit him so well, which is why I find the relic process so strange.

I know what you mean about the relic thing. It does seem a bit strange. I will say though that my first encounter with a reliced instrument came quite out of the blue. I picked up what I thought was a mid-60's Strat and strummed a few chords. Looking at the salesman I asked, "Where did you find this treasure and what's with the new case?" He smiled slyly and then went on to explain the whole relicing thing that Fender had started doing. He also mentioned that they subjected the wood to an "aging process" which, if you know anything about the wood in older instruments, is a key factor in their vibe or "mojo" as one guy up there in the NW put it.
Curious about the explosion of relicing that's going on these days I sent out an inquiry and found that only two actually applied any sort of aging to their process. Everyone else just mangled the instrument in one way or another and that was it - pretty superficial.
Fender did admit that they do a process that helps age the wood but it wasn't clear if that wasn't just part of their normal procedure in drying the wood for all the instruments they make.
I equate the relicing thing to being the same thing with old jeans. You can wear them in or buy them that way. As a photographer its similar to what some of us do to our images which is commonly referred to as grunge. I think it adds a bit of an organic [for lack of a better term] element to a world that is rapidly going digital. The more digital photography has become the more grunge some of us have become. [For an example of what I mean check out this photoblog: https://the-fingerprint-file.blogspot.com/ ]

Hope you're doing well with your chemo.