My daughters' piano and voice teacher Lorraine has dozens of students, and at the end of each school year she holds a formal recital, where nearly all of them perform a piece—or two or three—over the course of several hours at the Shadbolt Centre for the Arts in Deer Lake Park, near where my wife and I were married: 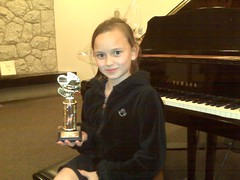 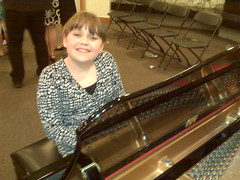 It's not the dreary stereotype of a piano recital at all. There are lots of jokes and laughs, kids give their teacher big hugs, and there is dessert and coffee at the end. At tonight's recital, my wife and I were there, as were both her parents and mine. I felt gladder than ever to attend—I missed last year's event because of pre-surgery radiation side effects. Despite lingering pain from my intestinal incident a couple of days ago, I was still able to make it down and enjoy the music.

Watching kids ranging across ages (from kindergarteners through university students, and even a grey-haired adult or two) play or sing the music they've learned almost brought me to tears a couple of times, such as when my older daughter sang the Beatles' "Let It Be" for the crowd, or her younger sister ended her nursery rhyme medley with a huge smile on her face.

When I quit music lessons when at age 12, my dad told me my skills were nevertheless good to have, because you can never be sure when you might need to play music on the street to eat. He was right: I ended up (by choice) making a full-time living as a musician more than a decade later—including occasionally busking downtown to pay the bills.

I don't know if my daughters will ever do that, but the joy of playing music is enough in itself. Plus free trophies and candy too.

I think there's a lot to be said about the therapeutic qualities of music too. No doubt the girls are having a hard time right now, and in my experience, nothing is quite so calming as taking my guitar to the beach and screaming at the ocean for a while.