Who are those fuzzy brown rectangular monsters chasing the kitten? 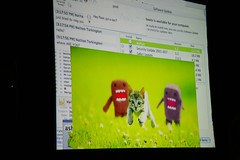 Then Tod asked, in frustration, "What IS this anyway?" Since I was already in bed with chemo side effects without the motivation to do much else, that got me rolling. It didn't take much to find out, and inevitably the best explanation was at Wikipedia:

[Domo-kun is] described as 'a strange creature that hatched from an egg.' Domo's favorite food is Japanese-style meat and potato stew, and he has a strong dislike for apples, due to an unexplained mystery in his DNA. Domo-kun is known to pass gas repeatedly when nervous or upset. [...]

The popularization of Domo as an internet meme and cliche outside of Japan is often attributed to a Fark thread from July 28th, 2001. The thread became popular on the then-young site, prompted in part by its serendipitous ID number of 31337. From there, Fark users began using the image and likeness of the character in various image contests and as additional, humorous banter in threads.

Alas, most images in the thread are now broken, so Google Images and Flickr to the rescue.

In other words, it's one of those semi-fluky Internet memes that no one could possibly have predicted. But the meme-launching "Domo-kuns chasing the kitten" photo has just the right combination of cute and "blurry '70s Sasquatch documentary" creepy for me that, in a way, it needs no explanation.