Meet the New Odds, (almost) same as the old Odds, on Facebook 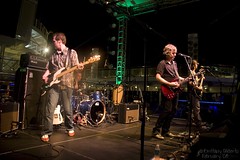 Back in the '90s there was a popular Vancouver rock band called The Odds (or just "Odds"). They and their cover-band alter-ego The Dawn Patrol inspired my cover band, The Neurotics, and our former original-band alter-ego, The Flu. And, oddly (ahem), since 2003 bassist Doug Elliott of The Odds has been (as "Swingy Neurotic") one of the rotating cast of yokels who play in The Neurotics.

Anyway, The Odds broke up in 1999 after four albums, tours with The Tragically Hip, and some pretty decent commercial success, but have now returned with a slightly different lineup as The New Odds, releasing a booty-shakin' new album called Cheerleader a few weeks ago. They've been touring across Canada too.

As part of the revival, I just spent a bit of time with Doug setting up a Facebook page for the group. If you're on Facebook and like the band (either in its old Odds or New Odds incarnation), or if you think you might, why not head over and become a fan (the link is on the upper right of the page), so you can find out when they're having shows, what they're up to, and so on? It's way less nasty on your eyes than MySpace, I tell you.

Wow, memories of University just came flooding back. It's good to hear that they're at it again.

Whoa, I think they played my Dry Grad, back in the day.

Oh, the Odds! One of my first rock shows--for free at a record store in Saskatoon. My next door neighbour and I biked to the show, and I got their signatures on my (one of my first, I might add) CD. Still one of the all time best Canadian bands in my opinion!