Today I am 39 for the first time

I don't think I'll become one of those reluctant to reveal his age. Hell, I'm damn proud of each further year I get at this point. So today I turn 39, for the first and last and only time. It will be a hectic day, with much packing and running around.

Why? Because tomorrow, Canada Day, July 1, my wife and daughters leave for a week at Disneyland, and I'm taking them, with our friend KA and her son, to the airport at 4:00 a.m. (!) for their 6:30 flight. A few hours later, I'll be back at the airport to drop off our friend Leesa for her return to Australia.

Then, as I begin a few days of solo living bachelor style, I have a couple of Canada Day parties I may attend, and maybe even a show by the Adam Woodall Band in the evening. That is, if I'm not so exhausted from the early wake-up that I just sleep away the rest of our national day.

My my. I have been at this blogging thing for awhile now.

And here, for no reason other than that I like it, is a picture of my daughters coming home from the last day of school: 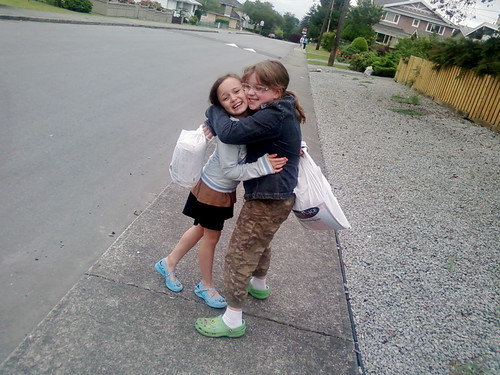 In your bio info I noticed that you relate your birthday to the first moon landing; my son-in-law, Neil, (named after Neil Armstrong, and husband of my daughter Saralinda, who is doing well now more than three years after her diagnosis of stage III breast cancer), was born July,20,1969, the actual day of the moon landing. So I will say Happy Birthday to you today, and the same to Neil in three weeks! And many more to both of you!

From Dennis, Johann and Matthew

Aye, great words Dennis though I suggest the inclusion of sandwiches.

Health, happiness, (beware if saying that with a Parisian, "h" dropping accent) rock, roll, and sandwiches to you Derek!

I hope you and family have a good time in Disneyland. I think your daughters are at a good age for enjoying the place, too.

Happy birthday, Derek! All the best wishes for the years to come.

Belated happy birthday, Derek! Wishing you a great year ahead.