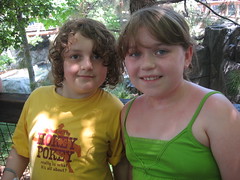 On Tuesday, my wife Air and our two daughters were joined by our friends KA and her son to fly to Disneyland, where they have been (with, for the first couple of days, our Australian friend Leesa, bound for home in Melbourne) for almost a week now. They fly home late tonight, when I'll pick them up at the airport.

As you might expect, it's one of those vacations that requires a nice break afterwards: they've been going going going almost non-stop for five days, with a few opportunities to sleep, swim in the pool, and have breakfast at the Best Western. To avoid the monster crowds on U.S. Independence Day on July 4, they rented a car for the 25-mile drive to Laguna Beach for a day in the surf, followed by In-N-Out Burger (mmm, In-N-Out).

The week has certainly felt odd here. I had a significant to-do list, including some paperwork, but (as I should have expected) only got about half of it done. What's most remarkable is how quiet our house is, and how little I've had to do laundry or run the dishwasher.

It's a bit lonely, however, and while I have as much room as I want to sprawl out in bed and sleep in, I've found myself still lying on my side next my wife's empty pillow, and not for as long hours as I might have thought. (I have returned to my college-age nocturnal behaviour, though, often staying up till 2:00 a.m. or later.) I'll be glad to have everyone back soon, so we can start our family summer, which I hope is a good one.

My husband's job has sent him away through the week so he's only home on the weekends (although now he's working Saturday's too so we only have him home Saturday night and Sunday). Last week, to save me some babysitting dollars my sister kept my kids (age 6 and 3) all week. I found myself doing the exactly same thing as you. Staying up very late, waking up often, leeping still on my side of the bed. Very few dishes or laundry to do. It's refreshing but very, very boring after a while.