Last year I created a little composite image of the various interchangeable-lens digital single-lens reflex (DSLR) cameras then available from Nikon and Canon, the two leading camera manufacturers. It turned out to be one of my most popular pictures at the Flickr photo sharing service, of course because photo enthusiasts like to argue about Canon vs. Nikon almost as much as Mac and PC people do about their computers.

It became out of date pretty fast, with models discontinued and new ones introduced. But people kept looking at the image and commenting. So I decided to go further and create a similar composite visual chart of DSLRs currently available, as of the end of June 2008, from all the major camera makers: Nikon, Canon, Sony/Minolta, Olympus, Panasonic/Leica, and Pentax. The pictures are all the companies' publicity photos, sometimes sourced directly from their websites, sometimes from others such as DP Review and DC Resource: 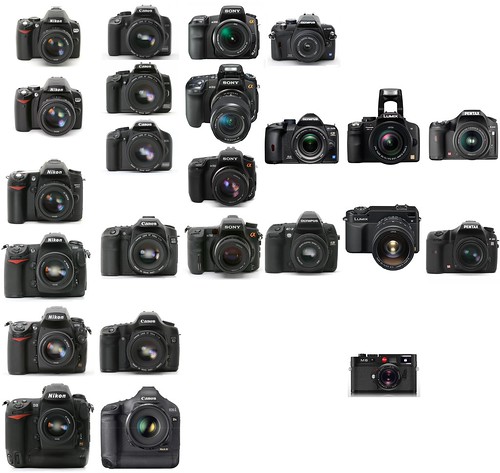 No wonder people are confused about which camera to buy! Prices here range from around $500 (with lens) to about $8000 (no lens). The smallest cameras in this bunch are the Leica M8 (off by itself on the lower right, and not an SLR, see below) and the Olympus E-420 (top of the fourth column, see this review for real-life size comparison photos). The heaviest are the two pro monsters, the Nikon D3 and Canon 1Ds Mark III, in the lower left.

I have excluded a few other makers, such as Fuji and Sigma, and rebadged models from Samsung (nearly the same as some Pentaxes) and Leica (almost identical to the Panasonics). These images reflect the main line of SLRs (plus the M8) as of this writing.

Relative camera sizes are not exact. The positions of the various models vaguely reflect my impressions of a combination of price, features, and market segment. That's quite subjective, so you could easily argue with my placement of some of them. Take the image as a general guideline. Look down the columns to see how different cameras from a single manufacturer compare from low-end to high-end; look across the rows to see roughly comparable cameras (in features, price, or both) from different makers that compete with one another.

Nikon and Canon are (currently) alone in providing full-frame size semi-pro and professional DSLRs: the D700, EOS 5D, D3, and EOS 1Ds Mark III. The Leica M8 is the real outlier—not an SLR at all, but a digital version of the classic Leica M rangefinder; I put it here because a significant number of photographers looking at the high-end Nikons and Canons might also consider it.

The most crowded market segments are the introductory level (with something, and sometimes several confusing models, from every manufacturer), and the midrange enthusiast section (with some interesting choices like the D80, D300, 40D, A700, E-3, DMC-L1, and K20D). With all the choices, this might be the most interesting time in the history of single-lens reflex cameras, certainly in the digital era.

I also left out some models. Canon's pro sports-focused 1D Mark III, which looks and works essentially identically to the 1Ds Mark III, is one—the difference is that the "s" indicates a larger full-frame sensor (Canon needs a serious simplification of its naming scheme). The Nikon D40 is also the same body as the D40x (and the D60), but with a lower-resolution sensor. Some of these models, such as the D40x and the Canon XTi, may be theoretically discontinued now or soon, but remain widely available.

Finally, there will probably soon be updates rendering this composite chart at least partially obsolete. Canon is expected to replace the three-year-old EOS 5D any old time, Nikon might do the same for the similarly aged D80, Sony may release a full-frame DSLR (since they make Nikon's full-frame sensor, I believe), and Nikon could bring out a D3x or similar model with a higher-resolution full-frame sensor like the 1Ds Mark III. I'll let you know.

Hey Derek,
Nice to visit your blog. I used your composite photo on my blog. Come visit some time.