Can Future Shop distinguish itself? 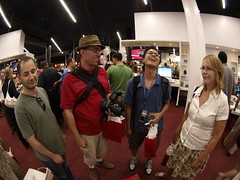 When Future Shop started here in Vancouver more than 25 years ago, big-box stores didn't really exist. If you wanted a TV, a boom box or Walkman, or a washer-dryer set, you'd probably visit a department store like Sears, Eaton's, Woodward's, or The Bay. For higher-end stereo equipment, a specialty hi-fi retailer, or a records-and-stereos store like A&B Sound, would do the trick.

Personal computers, such as they were, came from nerdy computer stores like The Byte Shop, Minitronics, or ComputerLand. Cameras? Either the department store or a photo shop like Lens & Shutter or Leo's. Electronic hobbyists often shopped at Radio Shack. You wouldn't expect to find everything in one place.

The first Future Shops didn't change that very much. They weren't big boxes either, but tended to be tucked into strip malls or other retail zones. They did offer low prices, modeled after the crazy discount electronics shops familiar to citizens of New York and other big U.S. cities. They expanded quickly, moving into larger warehouse-style buildings and buying in bulk, and by the '90s they were the largest electronics chain in Canada. They still are.

A couple of days ago, Future Shop's PR firm invited a few of us bloggers (as part of a bigger media and VIP crew) to the reopening of their renovated Park Royal outlet in West Vancouver. There were red carpets, wine and snacks, tours, and promotional stuff (I got a free Bluetooth headset in my schwag bag). It's the first in a series of renovations of their stores across the country in coming months.

The change isn't massive: the store still has the familiar red and white colours. There are the usual departments, digital cameras over here, TVs over there, video games in their own new section on the other side. There's a new central hub, with specialist staff to help people get different types of devices connected together. The company has expanded its installation service (now called "Connect Pro") for putting in home theatre systems and so on. There's a mini-Apple Store inside too. But the store still looks and feels like a big box electronics retailer, which it is. 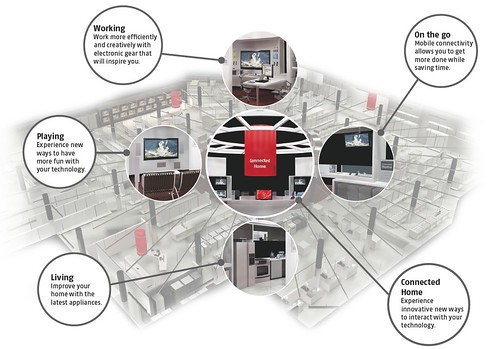 The changes are a response to the fact that consumer electronics retailing has changed massively in the past decade. Stores like Future Shop (and its parent U.S. company Best Buy, which bought out Future Shop a few years ago), and general big box stores like Wal-Mart, Costco, Canadian Tire, and even hugely expanded supermarket and pharmacy chains like the Real Canadian Superstore and London Drugs, now dominate.

Sears and The Bay soldier on, but Eaton's and Woodward's are long gone. A&B Sound is in trouble. Lens & Shutter and Leo's are still around too, and there are new places like the Apple Store. But many of us shop online (even when we buy from Future Shop itself).

Perhaps the biggest pressure on Future Shop comes from its sister company Best Buy, which has been opening big stores across Canada throughout the decade. One of the newest, a 10-minute walk from my house in Burnaby, is itself only 5 minutes from a Future Shop. The stores stock similar products, the websites work similarly, and for many people it's hard to distinguish between the two, except that Best Buy is blue and yellow.

The biggest difference doesn't work in Future Shop's favour: its salespeople work on commission, while Best Buy's don't (and Best Buy's ads make a point of it). Anyone who's shopped at Future Shop over the years knows the sales pressure that descends on you in the store, especially if you fit the profile of a big spender. Then there's the extended-warranty spiel, and the segregated checkouts for those just picking something off the shelf (long lines) or those who've worked with a salesperson (short to no lines).

It doesn't generally make for a great shopping experience, which is why I'll usually head to Best Buy or London Drugs to buy a new external hard drive or whatever I need in a pinch.

Future Shop isn't changing the commission system, but it is trying to reinforce that its commission sales staff receive significant training and should know their stuff. The new store is supposed to be set up to be more helpful and inviting, more boutiquey. Whether it succeeds, especially after the renovations are no longer so brand new, is an open question. Even on this first day, I could still feel the slightly-too-keen tension in the sales staff that tells you they're on commission. That's hard to hide.

However, looking around, I was impressed that the camera section, for instance, had a decent selection of models, even up to the medium-high end, from many of the major manufacturers, with display cases for Canon and Nikon in particular. But even on opening day, some of the display pods were mysteriously empty, and most of the cameras weren't functional because they had no batteries or other power, or lenses attached. It wouldn't be my first choice to buy a new SLR.

I might consider my local Future Shop if I were in the market for a flat-panel TV or a video game system, or something simple like an iPod, but probably not a computer or a washing machine. Electronics is largely a commodity business: no retailer can win on low prices alone, especially competing with online shopping.

The new West Van Future Shop is certainly an improvement over most of the company's stores. Yet I don't know if it's enough to keep the company expanding and fending off the competition. The change isn't big enough for me to make a special trip to West Vancouver to visit it without the free wine and snacks. But I will drop in next time I'm in the neighbourhood.

Thanks for coming along to the event, and for the excellent analysis. I agree that the stores are difficult to distinguish--I was chatting with somebody from FS about that at the event. I'd guess that they've got some medium or long term plan to separate the brands more clearly. Besides, you know, the colour.

Every time I order an item for a great price at Best Buy, it turns out to be out of stock and then they try to switch my order to something else. It has happened so often that I wonder about the bait and switch technique being alive and well.