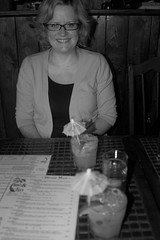 Thirteen years ago today, I was nervous and didn't sleep well. I had a garment bag hanging in the closet, and a couple of my best friends were staying with me. But my girlfriend Air, whom I lived with, wasn't there.

That's because we were getting married later that morning. She had stayed overnight with her two close friends, her wedding attendants. In the morning I put on my tuxedo and made my way to the Hart House on Deer Lake, not far from our home.

I didn't see Air arrive in the rented vintage Bentley limo with her friends and family. I waited outside on the lakeside lawn of the old mansion-turned-restaurant, under the huge tree at the end of the red carpet, with our 75 guests. I finally saw her emerge from the building into the sun as we played Van Morrison's "Crazy Love" on a boom box.

We've been together ever since, through thick and thin. And thick and thin there has been. I don't know who I'd be without her. Nor would I want to know.

Super amounts of congratulations to you both. Hope you have a fantastic day. Once again congrats!

You two are a real inspiration! Happy anniversary to you both.
much love,
Tara

Congratulations to you both! I hope you are having a fantastic day!

Happy Anniversary to both of you! You are a very special couple.

Wahoo!!! Happy Anniversary, you guys. Have a great day. Thinking of you both and hope to see you soon.

Congrats to the two of you!

Congratulations to two of the most awesome people I've ever met: you and Air.

Many, many hugs! Can't wait to get back to Vancouver and see you guys!