The Zune would be fun, if I didn't have to manage it from Windows 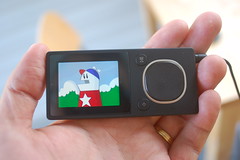 I finally did get the Zune player working a few weeks ago, and my daughter has enjoyed using it ever since with the same set of songs, videos, photos, and podcasts I first loaded onto it. But she wanted some different stuff, so today I borrowed by dad's Windows laptop again and set about updating the little device.

What a freaking pain! Even though the Zune software was fully installed and working, somehow it had forgotten most of the subscriptions I had set up, and was still slow, scatterbrained, unintuitive, and frustrating. Getting new media on it took well over an hour, since I had to try a couple of different approaches.

I'm a Mac guy, yes, but I've been using PCs for more than 25 years, and even worked for a Windows software developer for almost five of them. Yet every time I have to install or manage something using Windows, my wife and kids know to leave me alone, because it turns me into Mr. Grumpy Boy. The Zune software only compounds the problem—somehow Microsoft, the company that makes both Windows and the Zune, can't get them to play nice with each other. At least not for me.

So I'm reinforcing my original conclusion: the Zune device is very nice, with a pleasant and useful interface. It works well once you have media on it. If some third party (or Microsoft, not likely) made a Mac client to manage it, I'd quite like the little player. But the Zune software you have to use to manage it is crap, and only runs on Windows, which for me makes it doubly crap.

Grr. Grumble. Phht. I'm glad I didn't have to pay for the thing.

I've never used a Zune, but can't you manage/sync playlists from Windows Media Player rather than the Zune software?

Red Chair Software makes great alternatives to Nomad Explorer for Creative, iTunes, iRiver and Dell jukeboxes, but surprisingly not for the Zune.

Microsoft has locked the Zune down to its software pretty heavily, just like iTunes and iPods. I don't think WMP will work with it -- heck, the Zune can't even play PlaysForSure files!

Perhaps not all of the "forgotten" parts of your previous Zune setup can be blamed on the control software. I periodically clean out all the cookies and other "hidden" files, using Cyberscrub; perhaps some of that information was lost in that process.

Ah, that is possible, but only if Cyberscrub operates on all user accounts on the computer, I guess.

My main complaints aren't with the forgetfulness (I'm not sure I saved everything last time around anyway), but with the general kludginess of the software. It is pretty, but I find it hard to use, at least in my limited experience with it.