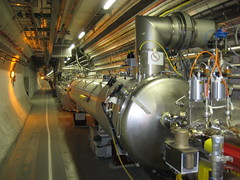 There's been a lot of talk recently about how the Large Hadron Collider (LHC) is the largest and most powerful machine ever built. I guess it is that. But there is another machine I still like better: the Apollo Saturn V moon rocket, retired more than 35 years ago. Each one was constructed not for years and years of experiments by thousands of people, as the LHC is, but for a single task lasting a mere week: to get three men to the moon and back.

The Saturn V was the most powerful machine of its time. I still think it is the most important device we've ever built, and as far as I know it remains the most expensive—in adjusted dollars, the Apollo program cost about $135 billion, many times the price of the LHC.

I've just watched In the Shadow of the Moon again, this time on television. (It was worth seeing in the movie theatre before, for the size of the images.) I was less than three weeks old during the launch and the eventual landing of the Lunar Module. If I'd been an adult, I think I would have burst into tears at both events. I've come pretty close just watching the footage, almost 40 years later.

I'm very happy that people think basic physics important enough to spend billions of dollars constructing the LHC. But, while it is impressive, that device is an experimental apparatus, carefully assembled over many years. Although the Apollo rockets were also a massive endeavour, it happened instead in an astounding rush, a little over eight years from conception to success, less time than it takes for Peter Gabriel to make a new album. It remains the only time we've taken people to another world. That's some really awesome machinery.

And that Peter Gabriel album wasn't even that good

I liked it, but it wasn't a pop album; it took some time to get into (and four years for me to figure out which song I liked best). In that it's like his second album back in '78. Some of the songs from "Up" still bubble up in my memory, unbidden and spooky.