If you buy a non–high-end digital SLR (DSLR) camera, it will probably come with what's known as a "digital" lens. There's no such thing, really: lenses for any kind of camera are analog devices that bend light with glass—or maybe plastic—just as they have been since lenses were invented centuries ago.

What "digital" means in this case is that the lens is designed to be used with the most common type of digital SLR camera, those with crop-frame sensors. Crop sensors are smaller than the traditional 35 mm film dimensions used in more expensive full-frame sensors. So lenses designed for them project smaller circles of light. If you put them on a full-frame camera (that is, if they will even mount), this is what you get: 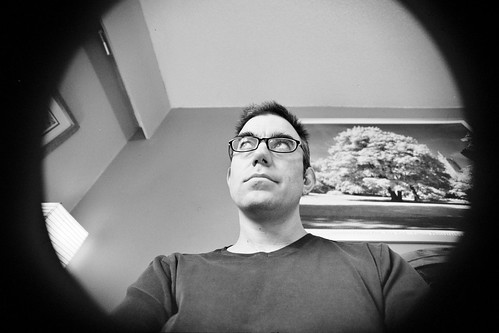 My AF Nikkor 18-135 mm f/3.5-5.6G digital ("DX") lens has a big black vignette circle around the image when zoomed out to 18 mm and mounted to my full-frame Nikon F4 film SLR. Click the image to see a representation of where a crop-frame sensor would fit in the image circle.

Lenses for traditional non-digital and full-frame SLR cameras also work just great on crop-frame models, but the extra money you pay for their wider image circles goes to waste, because the image around the edges doesn't get captured on the sensor. But I own one crop-frame lens for my crop-frame camera, and several full-frame lenses. Why?

The benefits of buying crop-frame digital lenses are that they're smaller, lighter, and cheaper—and they may offer focal lengths unavailable in their bigger brethren. But the benefits of buying full-frame lenses, conversely, are that they will still work fully if you later upgrade to, or want to borrow or rent, a full-frame camera body; and that they are generally better built because they are aimed at the professional photographers who tend to buy full-frame.

Interesting post. I knew that most consumer DSLRs had <35mm sensors but hadn't thought through the implications for the lens. And I was naive enough to assume that a "digital" lens was just marketing BS like "digital" headphones.

If I remember correctly from all the lens reviews I've read, the performance of a camera lens falls off towards the edges - chromatic aberration, barrel/pincushion distortion, reduced light transmission etc. So I think another advantage of using full frame lenses on a crop frame camera would be that you'll be using the 'sweet spot' on the glass and saving yourself from the glass around the edges?

P.S. I saw you flitting around with the camera at BestOf604 the other night. You got some great photos. I'm off to inspect them again and check for an absence of chromatic distortion in the corners which should prove my point :-)

You're quite right -- any lens designed for a full-frame 35 mm image circle will project the best portion of its image on a crop-frame sensor, even if it isn't the highest-quality lens.

But I shot Best of 604 with my one DX Nikkor crop-frame lens (the same one from this post, but on my D50 crop-frame camera), so especially on the wide-angle shots, you might see some distortion, aberrations, etc. Although the image lacks colour, you can see that the lens, zoomed wide to 18 mm, is doing some wacky things to the tree in the background, particularly the part on the extreme right side that would normally fall outside the sensor on a crop-frame camera.

However, would it not also be the case that the lens would need to be constructed to give a higher resolution image for a crop sensor, in comparison to a lens for a full-frame sensor of the same MP.

For the most part, both because the centre portions of lenses are the sharpest, and because modern lenses are so good, this isn't an issue, because the lenses provide better sharpness and resolution than even high-density crop-frame sensors can handle.

There is a question whether the highest resolution sensors (like those on the top-end Canon 1Ds Mark III, Canon 5D Mark II, Sony A900, and Nikon D3x) might out-resolve lenses, but:

"It depends on the lens you use, the properties of the light, the aperture and the format. Small format sensors may have surpassed the limit, this is, in most cases they are lens-limited in terms of resolution. It is easier to correct aberrations for a smaller light circle though, so you can approach diffraction-limited resolutions for lower f-numbers. The signal-to-noise ratio, however, imposes an inflexible limit to the effective resolution of the whole system, mostly due to photon shot noise."

So it's complicated, but most of us will never notice. However, if you're making huge prints from RAW camera data on the highest-resolution DSLR camera bodies, you should probably buy the best lenses you can.