History of the mall 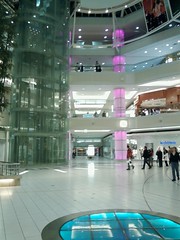 Through a chain of links from Kottke to Shopping Mall History to the Hudson's Bay Company website, I was interested to learn that two of the earliest shopping malls, West Vancouver's Park Royal and Seattle's Northgate, both opened in 1950 here in the relatively sleepy Pacific Northwest.

Even when I was a kid in the '70s, Park Royal was one of the biggest and most interesting malls in Greater Vancouver—I'd travel there quite regularly with my mother, even though it was at least a half-hour freeway drive across a bridge and there were several other shopping centres closer to us.

At that time, American TV also dominated our channel selection, so I often heard about Northgate (and its companion, Southcenter) on U.S. advertising, but I never visited until this year. (There was nothing special about Northgate except the dedicated shopping cart escalator inside Target.)

In the '80s, British Columbia's biggest mall complex, Metrotown, arose a mere ten-minute walk from our house, growing like kudzu around a Sears store that has been there for well over 50 years, and that used to be the only destination shopping in the area when I was young. On vacation, we've encountered people from the Seattle area who travel here just to shop at Metrotown, which seems weird since to me it's just our local mall.

Unlike monsters such as Mall of America or West Edmonton Mall, no shopping centre in our area has an indoor wave pool or amusement park, just lots of stores and restaurants. Yet despite decades of renovations and expansions, when you visit places like Park Royal or the Metrotown Sears or Northgate, you can see the design legacy of their origins. Something is still fundamentally 1950s about the parts that remain.

I bet some of them have time capsules still waiting to be opened.

your blog has the best photos. You're a really good photographer.

Northgate sucks. It's not our best mall. Some would say that's Alderwood, but I am partial to Belle Square. But you are right about the Target. That is the Target I would go to on my lunch breaks. I would get a cart even if I didn't need to, just so I could take it up and down the escalator. It's the little things....

I prefer Alderwood to Bellevue Square, but they're both good, and University Village is fun too.

Hmm, notice how all three have Apple Stores? Alderwood used to be the closest Apple Store to Vancouver until our Pacific Centre outlet opened earlier this year, and numerous Vancouver geeks (ahem, some close to this blog) traveled to Alderwood Mall just to go to the Apple Store.

Not so much anymore, especially now that the Canadian dollar has tanked in value again.

The oldest 'downtown' indoor shopping center in America which happens to be in my hometown of Rochester NY just closed. It's a sad day for malls everywhere.

Our major downtown indoor (underground) mall, Pacific Centre, by contrast, is doing very well. It was recently significantly renovated, just opened a revamped major Holt Renfrew outlet as well as new H&M and Apple stores, and as of today, when Air and I visited, had a LOT FULL sign on its massive underground parking garage -- something I've never seen before.

Then again, in contrast to Rochester, Vancouver has seen a lot of people move into the downtown core to live over the past couple of decades, so that's not too big a surprise.