By the river of Albion

I've lived in the Vancouver area my whole life, but somehow I had never been on the Albion Ferry, which crosses the Fraser River east of the city. Today I rectified that. My kids have been on the ferry several times with my in-laws, so they showed me how to get there and how it works (they had the day off from school). It's a short trip, only a few minutes, but it has a fantastic view: 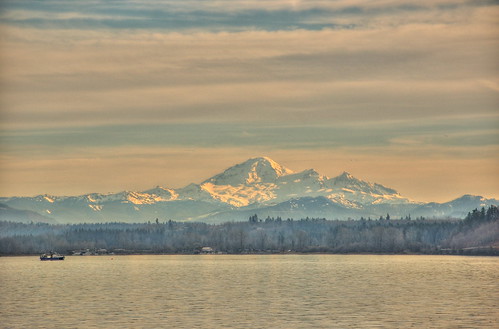 From the Maple Ridge side of the river, the boat takes you to the village of Fort Langley, where the province of British Columbia (then a British colony) was born 150 years ago this month. There the girls and I had lunch, and I bought them some stylish new hats.

The Albion Ferry route will soon be replaced by the Golden Ears Bridge, nearing completion slightly further downstream, ending the 51-year run of ferryboats there on the river. Some people want to save the Albion Ferry, but I don't think that's likely to happen. So my first trip might also be my last.

I don't think they will use the Albion in maple Ridge. They might use the 2 ferries else where.

The Albion is such a pain. You can usually drive from Maple Ridge to Mission to Abbotsford to Langley faster than you can get across from the ferry during regular times. I thought going over at 230pm would have beating traffic, nope was in line for 1.5hrs to get from maple ridge to langley.

Ah well It does have a nice view and is pretty quick once you're on the ferry and it does take you through Fort langley. Too bad the bridge will have a 2.50 toll each way.

The $2.50 toll is likely less than the vehicle use cost for that roundabout road route. And I'd get used to tolls: while a couple of generations have grown up in Greater Vancouver without toll bridges since they were removed in the 1960s, many other cities have toll bridges and roads, and we're likely to get more. I'd consider them a fair usage tax, especially if it can help build more transit.

I love those random, across-Metro-Vancouver trips! That's another thing I have never done in my life, and I had thought about it early this year but never got around it! Great to hear you had the chance to do it before the bridge replaces it!

Clever title. But it doesn't start with W!