The Lions' Gate and Pattullo turn 70

According to Tod Maffin and Buzz Bishop, this week marks the 70th birthdays of both the Lions' Gate Bridge and the Pattullo Bridge here in Greater Vancouver. It would be hard for two bridges to contrast more in their appearance: 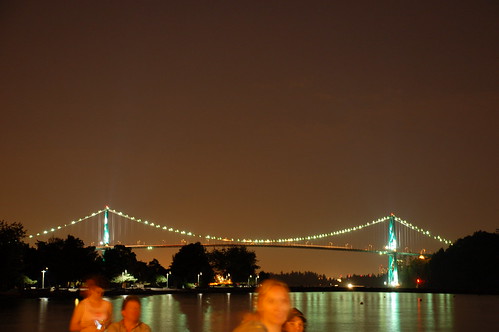 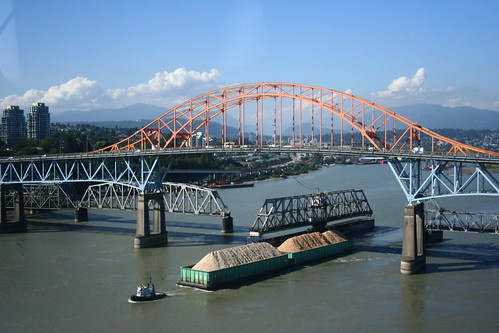 The Lions' Gate (connecting downtown Vancouver's Stanley Park with the North Shore across Burrard Inlet) is an elegant suspension bridge, lit at night with glittering lamps, and a beautiful landmark admired throughout the city and the world. It's on many of the city's postcards. It was heavily refurbished a few years ago, but looks the same as it always has.

The Pattullo (connecting New Wesminster to Surrey) is an ungainly girdered structure often cursed by those who must drive its narrow, dangerous lanes. Premier Duff Pattullo, after whom it is named, apparently called it "a thing of beauty." Tod says, "Yes, he was likely stoned." Plans are afoot to knock it down and replace it.

My favourite part of this entry is how you quote Tod and I as if we are bridge historians for Metro Vancouver.

I actually know a Vancouver bridge historian. There is such a person!

But I was mostly commenting to say that Duff Pattullo was responsible for championing some of the most racist policies in BC history. He was all about the "Yellow Peril" and blocking Asian-Canadians from having the right to vote, enlist or, eventually, even live in Vancouver. He didn't so much build bridges as chasms.

When my nephew was about two years old, it would be a game to ask him what bridge we were crossing when we drove over it.

At the time his family were living near the Port Mann Bridge.

"What bridge is this, Michael?" I would ask.

"The Poor Man Bridge!" piped up the little voice from his carseat.

But he could never quite get the hang of Pattullo...