You will recall my crazy long eyelashes, which have grown to ridiculous length since one of my previous chemo treatments stopped in the spring. They seem to keep growing even when they shouldn't, so tonight my lovely wife took some scissors to them so my lashes stop batting against my glasses and smearing them up: 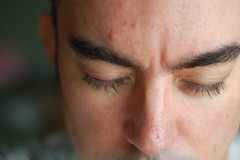 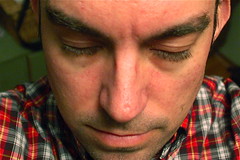 My lashes still look somewhat mutant, because of their unnatural lushness and now cropped ends—they now look a bit like brushes—but it's an improvement. For good measure, she trimmed my eyebrows too, since they were going a bit nutty as well. It feels much better.

Wow. I would have been scared of having scissors near my eye lashes!

I am a little jealous of this problem of yours.

Andrea, like anything good, sometimes there can be too much of it.

And Air is very steady with the scissors. Good thing -- she was using big ol' serrated kitchen shears, not wimpy little grooming scissors as you might expect. I only flinched a little.