How do you make a straight edge from scratch? 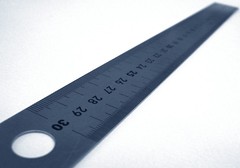 Tim Bray, in watching a construction site across the street from his house, wonders where straight lines come from—if you wanted to, how would you make a straight-edged measuring device if you had no other artificial reference?

His commenters have lots of good suggestions, including three-edge averaging instructions originally posted online more than a decade ago, extrusion techniques, string-snapping ideas (I suggested one), calm liquid surfaces, and even creased pieces of paper. In construction projects, snapped strings and plumb bobs seem to have been the main methods for many millennia.

I wonder if one could establish a scale of how far "away from scratch" many modern objects are? For example, you can apparently make your own straight edge from scratch ("scratch level 1") using the techniques above, and any kid can make a level-1 sharp stick by breaking it off a tree and rubbing it against a hard surface like a rough stone. But something like a stove or a car or a computer (or even a doorknob) is manufactured using steel and electricity and precision-made components from factories, which themselves need factory-built tools to build, and so on. Their "scratch level" might be in the dozens.

If that seems confusing try constructing a pentagon or a 17-gon with only a compass and strait edge. It was proven awhile ago by Gauss that only certain polygons can be constructed with strait edge and compass.

Let's do that, but build the straight edge and compass first...

That could be a very cool wiki-esque side project. Maybe even leading to History Channel show, a'la Bre Pettis.

Everything has a history and most things, older than a few years, have a really interesting path of evolution.