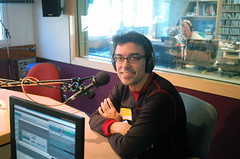 I'll be on the radio again, but it's not about cancer this time—I get to nerd out instead! This afternoon, CBC Radio Vancouver's "On the Coast" drivetime show will be talking about the City of New Westminster's feasibility study/pilot project to create a citywide Wi-Fi network (from the May 11 New West council meeting). I'll be on the panel by phone, not in the studio as in the photo.

UPDATE: Audio of my interview is now available at my podcast. You can also grab the MP3 file directly (2.3 MB).

The broadcast panel begins at 5:40 p.m. Pacific Time on 690 FM or 88.1 FM in Vancouver, or you can listen to it online. I'll try to record the stream and post the panel to my podcast shortly. Municipal Wi-Fi was a big idea a few years ago, but many of the utopian early predictions of free wireless service across big cities haven't panned out, and the rise of high-speed cellular data coverage (such as with the iPhone), more free hotspots in cafés and such, and commercial WiMAX networks like Rogers Portable Internet have made it seem a little less necessary.

If you have any thoughts about this topic that you think I should address on the air, leave a comment below, email me, or send me a message on Twitter in the next couple of hours and I'll see if I can incorporate your ideas.

Security of data transmitted, cost (free or subscription), reliability, any restrictions (bandwidth), speed (bandwidth), area of coverage (dead zones?), health concerns (with cell towers there are, not sure about Wi-Fi). Have a fun interview!

Congrats on being again on the CBC! My suggestion - discuss why first New West rather than Vancouver? I mean, seeing as Vancouver is supposed to be a larger city... with a larger tech community.

I'll try to tune in!

It will be good to hear you again. However, as an anarchist, I cannot support the extension of government in this way. Remember, what the government purports to give, it can quickly take away.

Make that two people who are curious about why it's not happening in Van city proper? Or why not along peopled/busy corridors (Main Street, Commercial, 4th, Robson, Granville...)? Or thoughts on the democratization of web connectivity by punching it into the DTES? Is this a phase one, with soon-to-be-rolled out future phases?

My speculation: first of all, New West has its own city government, and Wi-Fi hasn't been a priority in Vancouver proper. Second, by comparison New West is also a MUCH smaller land area, and thus easier to cover. Sure, White Rock, Belcarra, and Anmore might be smaller too, but it makes sense that an initiative like this might appear in place where it's more logistically feasible.

City of Vancouver DOES have plans in the works. I say this with 1st-hand knowledge.

For the whole city?

Initially for the whole city. Then reality set in. Smaller scale plans now.

Which is, I think, sort of the point I made on the radio.

Good job... I listened to the download. Clear and in language most can understand. Metro wireless is tough. Not sure if in the long run a good idea for gov to do unless they are truly committed to the steep post install cost to support, maintain and upgrade.