Where the white things are 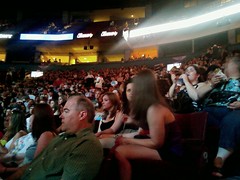 Vancouver is a heavily multiethnic city, and most of the time you see that wherever you go. But there are some events—even ones that don't have a specific cultural or religious focus—that slice our population into a demographic so narrow that if you attended them, you'd think this place was a monoculture.

One of those was the Dane Cook comedy show that my wife and I attended last night. It was a fun evening, with three comedians mostly telling sex jokes. But holy crap, I don't know if I've ever seen so many white people in one place. Well over 10,000 fans at Vancouver's GM Place, and overwhelmingly it was young white boys with baseball caps, logo T-shirts, and plaid knee-length shorts; and girls of a similar age with long straight hair, spaghetti-strap tops, big sunglasses, and high heels or flip-flops. (The blazing hot weather outside surely contributed to the dress code.) We had to look long and hard to find the smattering of Asian, black, and Indian faces in the crowd. In Vancouver, that is damned weird.

Cook himself isn't the most laugh-out-loud comedian I've ever seen, but there's a mysterious appeal to his stage character, which is a sort of potty-mouthed Han Solo: roguish, handsome, kind of a prick, and yet strangely vulnerable and appreciative. He plays the same kinds of guys in his movies most of the time—the charming asshole best friend who likes to talk about his penis.

But back to the audience. While Cook is closer to my age (nearing 40), his fans skew very young. While there were a few of us approaching middle age, it was easier to spot a set of braces or the giddy emotions of someone whose prom dance might have been last week. And pretty much everyone completely ignored the three announcements that "cameras and recording devices are strictly prohibited." There were camera flashes and the orange glow of digicam and phonecam focus lights during the whole multi-hour show.

The concert brought back a memory of a very different event my wife and I attended about seven years ago. It was a show by Neil Finn (of Crowded House and Split Enz) at the Vogue Theatre, and while the crowd was almost as Caucasian, it was much smaller, and rather than young, everyone else was our age. It was a high-school reunion for the Class of 1986. Perhaps that's what a Dane Cook show will seem like in another 15 years too.

Have you seen the Scooby Doo with Dane Cook? It used to be up on YouTube, and was absolutely sidesplitting, because of course the two kinds of comedy are so different. It was like David Lynch doing Flintstones or something.

I haven't seen it, but I'm also not having any luck finding it online now. Too bad.

I'm a little surprised that 10,000 people came to a comedy show. I know Cook is popular, but that's impressive.

No kidding. I thought it might be a concert-bowl type setup, but it was in the round, with the floor and the lower level almost full, and quite a few people in the top level of the venue too.

Then again, I was surprised that so many people would show up there for the Juno Awards too.

Last time I saw that many white faces was at the Metallica concert. A fairly specific white-male demographic represented there, as well.