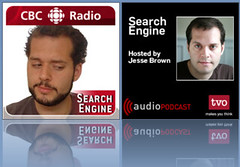 Last year, I wrote about CBC's two radio tech shows, "Spark" and "Search Engine", and how they were sometimes hard to tell apart. CBC management felt the same—"Search Engine" was downgraded from a full radio show to a podcast only last year, and recently got cancelled altogether, despite being one of the network's most popular podcasts.

Fortunately, TVOntario picked it up, and host Jesse Brown has now put out two episodes at the podcast's new home. (You can subscribe using the RSS feed or at iTunes.) The Facebook group stays the same, with the new name. If you were a "Search Engine" listener before, I encourage you to subscribe at the new feed.

And I do have to say, Brown's new clean-shaven look is a big improvement over his old scruffy '70s rock star beard.

P.S. "Spark," to which I've occasionally contributed, continues on at CBC, and is growing from a half-hour show to a full hour on the radio in the fall.